Tollywood Debut Heroines 2021: Telugu Cinema is always been the first choice for debut Heroines and new comers in India. If there’s one industry that is constantly seeking new talent, it’s Tollywood. In recent times, several divas from Malayalam, Kannada and Tamil cinema are being roped into Telugu movies for leading lady roles. Like every year, 2021-22 will also mark the debut of a number of fresh-faced newbies, hoping to carve a niche for themselves in Tollywood. Here’s a look at the 9 Tollywood Debut Heroines of 2021-22. 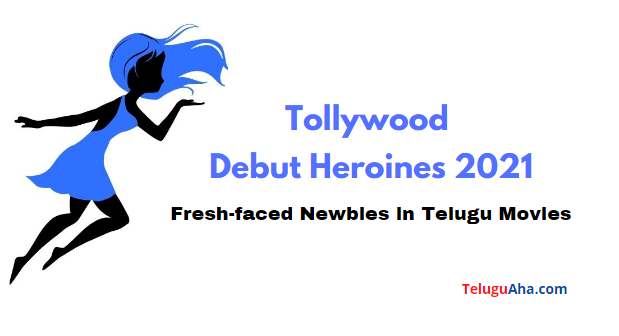 Krithi Shetty is a model and Indian film Actress made her debut into movies with Telugu film “Uppena (2021)” produced by Mythri Movie Makers starring opposite to Panja Vaishnav Tej. The Blockbuster success of Uppena made her one of the top actress in Tollywood now. Krithi Shetty is busy with multiple films which are in different production stages.

Gorgeous lady Priya Prakash Warrier made her Telugu debut with “Check” movie in which she has shared the screen space with Nithiin under the direction of Chandra Shekhar Yeleti. The movie is a moderate success at Box Office. However, she got immediate offer to play the female lead in ISHQ which is about to release in Summer 2021

Puri connects girl Ketika Sharma made her debut in Tollywood with Romantic (2021), which is about to release. Before its release, Ketika Sharma said to be taken as a Heroine in NTR30. On the other side she has also singed a a romantic entertainer with Vaishnav Tej.

Bollywood beauty Saiee Manjrekar who made her debut with Tollywood with Major starring Adivi Sesh, has been roped in to work with Mega Prince Varun Tej in the sport based drama titled Ghani. Also, she has been roped in Allu Arjun starrer upcoming film which will be helmed by none other than Koratala Siva

Bollywood sensation Mithila Palkar is all set to make her Telugu debut with the upcoming yet-untitled remake of Tamil romantic comedy, Oh My Kadavule. Vishwak Sen is on the board to play the lead role and he will romance with Mithila Palkar in this film.

The makers of Sithara Entertainments have roped in Malayalam actress Anikha Surendran for Kappela Telugu remake. She was popular by the name Baby Anikha in Mollywood & Tamil film industry. If everything works fine, Anikha Surendran is all set to make her debut in Tollywood as a lead actress opposite to Vishwak Sen.

Eve though Nazriya is a well experienced actress, it took many years for her debut in Telugu. Her Telugu dubbed movies are very popular in Telugu states. Now Ante Sundaraniki marks Nazriya Fahadh’ debut in Telugu film industry. Interestingly, her husband Fahadh Faasil also making his debut with Pushpa this year.

Tamil popular celebrity and actress Iswarya Menon hasn’t done any Telugu movie yet. She has so much following on social Media profiles. Now, the actress will be making her Tollywood debut. She has bee roped to play the leading lady role in Mass Maharaja Ravi Teja’s next directed by Trinadha Rao Nakkina.

Popular Malayalam actress Aishwarya Lekshmi making her Tollywood debut in Satya Dev’s upcoming Telugu film ‘Godse’ directed by Gopi Ganesh Pattabhi. She is also been a part of Mani Ratnam’s magnum opus Ponniyin Selvan is already handful with a bunch of projects in her kitty.

Kannada Top Heroine Rachita Ram is making her Telugu debut with the upcoming film ‘Super Machi’ starring Chiranjeevi’s son-in-law Kalyaan Dhev in lead role. Directed by Puli Vasu, the shooting of this romantic entertainer has been wrapped up and the release date is expected to be out soon.