Tollywood Actors Who Own Private Jets 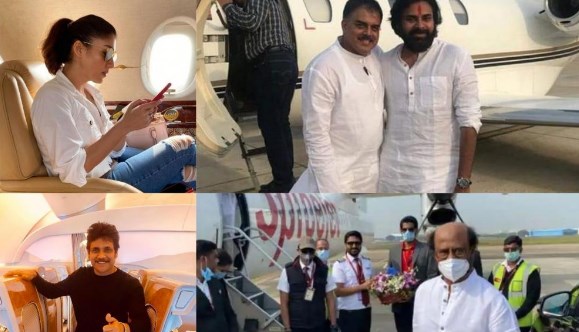 In Tollywood, it’s reported that there are only a few who own private jets. Let’s see who possesses private jets with details. The private jets cost around Rs. 50 – 80 crores.

Below is the list of stars who have private jets.

Ram Charan is the first one in Tollywood to have an airline service known as TruJet. He goes to places with his wife Upasana on his private jet.

Allu Arjun bought a private jet after his marriage. On his own plane, he attended Niharikas marriage.

Akkineni Nagarjuna is one more tollywood star to join in the list. He, reportedly own a private jet for vacations.

Pooja Hegde too reportedly has private jet. Ala Vaikunthapuramullo fame goes to other places on his own jet plane.

Mahesh Babu is said to have his own private jet. His wife Namrata has shared their family pics in private jet on her social media Instagram.

Pawan Kalyan has own a private jet that carries him to remote places as well as for political trips.

Jr NTR is believed to have his private jet that would be around Rs. 80 crores. It’s usually parked in Shamshabad Airport in his free time.