TNR Biography: Here are the latest updates of Idream Anchor Thummala Narsimha Reddy Age, Family, Movie List, Death & More. TNR is a popular face in Tollywood circles and well known to movie lovers with “Frankly with TNR” talk show. This talk show has took him a lot of fame and popularity among the Tollywood celebrities and Telugu audience. 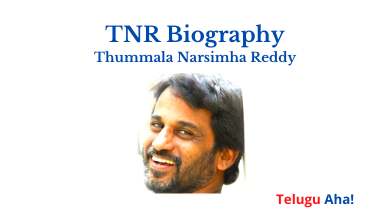 Thummala Narsimha Reddy (TNR) is from Pavunur, Adilabad district came to Hyderabad and worked as an assistant writer for L.B. Sriram in movies like Hitler (1997). He then worked as a full time director for the Neralu Ghoralu TV series that aired on ETV for more than 4 years. Since then, TNR has made a name for himself as a Film journalist and anchor in iDream Media.

With the popularity of “Frankly with TNR” talk show, TNR has got opportunities in over 20 films and was busy from the last few years. TNR wants to make his mark as a director in Tollywood along with acting profession. He is aged 46 and currently survived by his wife and two children. The Telugu film industry has expressed shock over the death of TNR. Many celebrities including Chiraneevi, Mohan Babu, RGV, Nani and others prayed for peace of his soul.

Thummala Narasimha Reddy was born on 9 January 1976 in Mancherial. His father Rajireddy won as a sarpanch of Mancherial three times. With the death of her mother at an early age TNR was raised by his older sister. TNR completed his schooling at Saraswati Shishumandir school and degree at Vivekavardhini college from Hyderabad. He is a big fan of Megastar Chiranjeevi and he always wants to make an interview with Chiranjeevi but it could not happened.

Frankly with TNR show has brought him popularity and craze mainly among the youth audience and Telugu film lovers. Due to of the familiarity with Toollywood directors and artists with this show he has got good no.of opportunities in many small movies. TNR notable movies in Telugu are as follows.

TNR was affected with COVID-19 for the second time in May 2021. Even though he was recovered from the first wave infection he is unable to recover from the infection caused due to of the second wave which went severe. He was admitted in SVS private hospital at Kachiguda for treatment but he has died on 10 May 2021 with respiratory problem.