Tirupati MP Candidate Gurumoorthy Biography: With the sudden demise of former Tirupati MP “Durga Prasad Rao” from YSRCP party, the party has announced a new candidate for the By-Election who is none other than Gurumoorthy, a physiotherapy doctor. Reportedly, Jagan only welcomed Gurumoorthy to politics after seeing his service to the people in Rayalaseema districts. Also, he is the one who accompanied him throughout his padayatra as his personal physiotherapist from 2017 to January 2019. 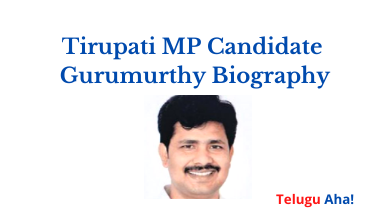 Born from a humble background at Mannasamudram village in Yerpedu mandal of Srikalahasti assembly constituency near Tirupati on June 22, 1985, Maddila Gurumoorthy went on to pursue physiotherapy at Sri Venkateswara institute of medical sciences (SVIMS) and later qualified for the manual therapy as well.

After the demise of MP Durga Prasad due to Covid-19, all Party leaders and politicians expected allotment of the by-election ticket to his Family members. But Chief Minister Y. S. Jagan Mohan Reddy surprised everyone by selecting Dr.Gurumoorthy as the By-election MP candidate.

Maddila Gurumoorthy is from a lower-middle-class family done his schooling in Bandapalli. He did his entire education in the Telugu medium. He has done his intermediate and Physiotherapy course in Tirupati. He is from a family eight members. He has 4 elder sisters and an younger sister.

As a YS Rajasekhar Reddy Follower

Maddila Gurumoorthy who is a devotee of late YS Rajasekhar Reddy has given a green signal for being with Jagan in his padayatra and served him as a physiotherapist. Since then, he has been with Jagan and serving him.

How Maddila Gurumoorthy Got MP Ticket?

Due to the untimely death of YCP MP Balli Durgaprasad, by-polls have been declared by the election commission. Hence, Jagan declared Gurumurthy as a YSRCP candidate for the Tirupati by-polls. With the support from Jagan, Gurumurthy contested in the By-election and won with a good majority.

YSR Congress Party’s Turupati MP candidate Gurumoorthy has won Tirupati Lok Sabha by-election. Latest reports suggests that Gurumoorthy has scored an astonishing victory. He won by landslide victory of over 2,70,000 votes against his opponent Panabaka Lakshmi who is from Telugu Desam Party. More than 6.25 Lac votes were polled to Gurumurthy in the MP By-election.