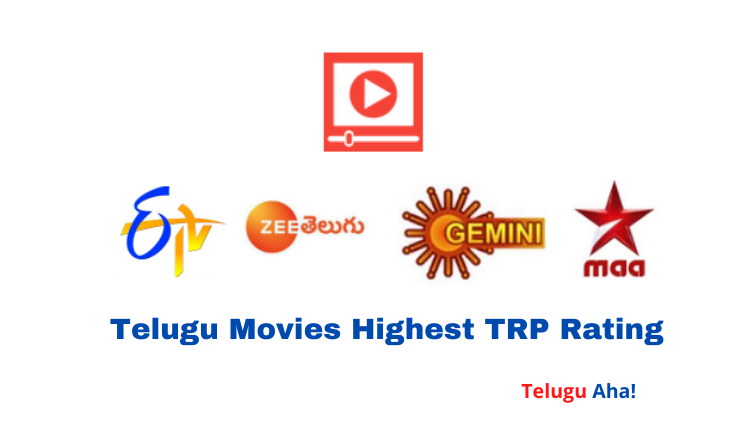 Star Maa, Zee Telugu, ETV, Gemini TV, and Star Maa Movies regularly be in the top 5 places of TRP ratings. In the year 2022, many new movies were premiered on these channels with the highest TRP rating. The latest sensational movie Uppena had its world Television premiers on Star Maa TV with 18.5 TRP rating, which is the highest for Telugu movies in the year 2022. Similarly, in the last year movies like  Ala Vaikunthapurramuloo and Sarileru Neekevvaru registered 29 and 23 trp ratings and occupied top two places. So, take a look at this complete article to find out the Telugu Movies Highest TRP Rating 2022.

We will update the List of Highest TRP Telugu Movies Rating 2022 weekly from BARC Official Date. So, Let’s jump into our main TRP ratings of Top Telugu movies. This list of Telugu movie’s trp ratings was updated on February 2022. So, here you can check this week’s latest Telugu movies and Entertainment TRP Rating with rankings.

Due to imposed Lockdown, many of the people in India are restricted to their Houses watching movies and entertainment-related stuff. During this time, many new Telugu movies have recorded the highest TRP ratings. Movies like Ala Vaikunthapurramuloo, Sarileru Neekevvaru, Prathi Roju Pandage, Vinaya Vidheya Rama, and more movies have achieved this feat.

Take a look at the list of Highest TRP Telugu Movies Rating 2022 on the TV according to BARC i.e Broadcast Audience Research Council India.

In addition to the above list, you can also find the all-time highest TRP Telugu movies till 2022.

The all-time top 5 Telugu movies with the highest TRP rating excluding Baahubali 2: The Conclusion (22.7 TRP) and Baahubali: The Beginning (21.8 TRP) are as follows.

Allu Arjun’s latest movie ‘Ala Vaikuthapurramuloo’ which was released on Sankranthi 2020 has become the All-Time Blockbuster hit movie. After six months of its theatrical run, the film has world Television premiers on SUN Group’s Gemini TV with the highest TRP rating to date. The film has reportedly got the highest TRP rate of 29.4, which is the highest for Telugu movies on TV channels. Ala Vaikuthapurramuloo was directed by Trivkram while produced by Harika and Hasini Creations. SS Thaman music is the major highlight of this film. The songs composed by SS Thaman are still in the trending state on various Apps. Also, fetched millions of views.

Mahesh Babu-starrer Sarileru Neekevvaru was premiered on March 25, 2020, on Gemini TV on the special occasion of Ugadi. The TRP rating of Sarileru Neekevvaru for the world television premiers is 23.04. This latest action entertainer film starring Superstar Mahesh Babu and Rashmika Mandanna in lead roles is the second top movie in TRP ratings. Moreover, the film marks the comeback film for Lady Super Star Vijayashanti after 13 years. Mahesh Babu’s Sarileru Neekevvaru is the one of the film that has occupied multiple positions in highest TRP ratings of 2020. This film had world television premiers on Gemini TV on the eve of Ugadi festival with a TRP of 23.4 rating.

The film in its world television premiere on Star Maa has got a record 18.5 ratings. It is a first-time feat for debutant hero, heroine, and a fresh director.

The romantic and Family drama Prati Roju Pandage starring Sai Dharam Tej and Raashi Khanna has turned out to be the biggest hit film not only at box office but also on TV. Prati Roju Pandage has registered a whopping of 15.3 TRP rating and stood as one of the highest TRP rated movies in recent times.

Are you curious to know about the TRP ratings of a Telugu dubbed movie? then have a look into this section. Below are the list of Top Rated Telugu Dubbed Movies TRP.

Does the Movie Success Affects TRP?

No, movie success at Box Office doesn’t matter for the highest TRP in any industry, especially Tollywood. Many of the Telugu flop movies have created TRP records on Telugu Television channels. Flop movies of Big stars like Athadu, Vinaya Vidheya Rama did this amazing feat on small screens. The latest Bollywood disaster “Laxxmi” also registered highest TRP for an Indian film though it was a big flop. So, we can come to a conclusion that a film success is not a matter for the movie TRP in Television.

It is based in Hyderabad, Telangana, India. Telugu TV industry also is known as Tollywood TV Industry.

✅ What Are The Top 5 Telugu Entertainment Channels?

✅ Which is the Oldest TV channel in Telugu?

Gemini TV and ETV are the oldest TV channels in Telugu

✅ Which Telugu TV Channel has bought the Satellite Rights of Vakeel Saab?

✅ Which Movie can Break the Ala Vaikuthapurramuloo TRP rating?

The details are RRR Satellite Rights not yet revealed.

✅ Which Telugu TV Channel has Highest TRP Every Week?

Star Maa is currently ruling the Telugu TV entertainment industry with highest TRP ratings every week. The reason is simple, it has many programs that creates audience attention.

✅ What is the upcoming biggest TV program in Telugu?