Tamannaah Bhatia Wiki and Biography: Tamannaah Bhatia is a well-known actress in both Tamil and Telugu movies. Because her skin was so light, people called her “Milk Beauty.” In the Indian movie business, it was said that Virat Kohli’s ex-girlfriend was Tamannaah. 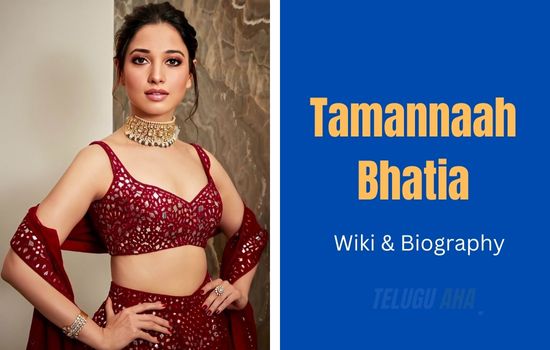 She went to the Maneckji Cooper Education Trust School and the National College, both in Mumbai, where she got a BA.

Tamannaah Bhatia was born on December 21, 1989, in Mumbai, Maharashtra, India. She is 29 years old right now. Even when she was a young child, she liked to act. She went to a numerologist, who told her to change her name from Tamanna Bhatia to Tamannaah. Her friends and family started calling her “Tammy” and “Milky Beauty,” and the names stuck.

She was up for many awards for the roles she played in movies. In 2017, she was given the “Dayawati Modi Award,” which is one of India’s highest honours in the arts and sciences. In honour of her contributions to Indian cinema, the Central Indian Academy of Cinema (CIAC) and KEISIE International University also gave her an Honorary Doctorate.

When she was 13 years old, Tamannaah began to act on stage. She was seen for the first time at her school’s annual day event. After that, she was given the lead role she plays now. She moved to Mumbai the next year and started working for Prithvi Theatre. She started acting as soon as she graduated from high school.

She sang on the song “Lafzo Mein” from Abhijeet Sawant’s album “Aapka Abhijeet,” which came out in 2005. In the Bollywood movie Chand Sa Roshan Chehra from 2005, it was her first time on screen.

After that, she went on to make movies in Tamil and Telugu. Ayan, Paiyaa, Siruthai, Veeram, Dharma Durai, Devi, Sketch, and 100% Love are some of the movies she has been in. There are also a lot of other movies, like Thadaka, Bengal Tiger, Baahubali: The Beginning, and Baahubali 2: The Conclusion.

She started out in South Indian movies and then went back to Bollywood. She has been in a number of magazines and newspapers, such as “Himmatwala,” “Humshakals,” “Entertainment,” and so on. Even though her first Bollywood commercial film, “Himmatwala,” did not do well at the box office, she was cast in successful movies.