Swathimuthyam Movie Review: Bellam Konda Suresh was one of the top and the most successful producers in TFI as his elder son Bellamkonda Srinivas was grandly launched and now his second son Bellamkonda Ganesh’s turn, surprisingly, he has launched with a small film called Swathimuthyam, the film’s trailer has grabbed the attention and makers have also promoted the film quite well and finally the film got released amidst the big films like Chiranjeevi’s God Father and Nagarjuna’s The Ghost, well, let’s see whether the film is worth watching or not. 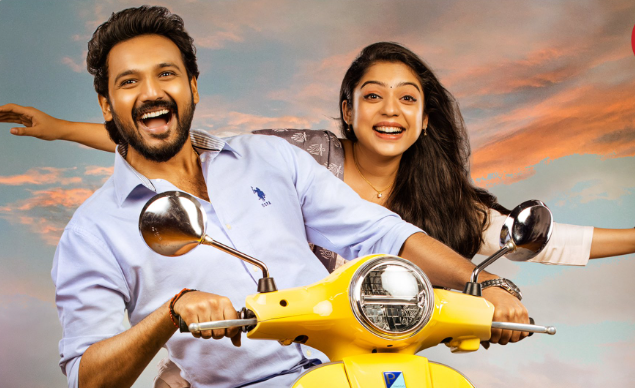 Ganesh(Bellamkonda Ganesh) is an innocent guy who works at the electrical shop and his family arranges a match and he goes and meets Varsha, where both like their ideologies, everything went smooth but twist arises in the tale, when Ganesh divulged his problem, finally, what was Ganesh’s problem is form rest of the story.

Ganesh Bellamkonda, Varsha Bollamma, Vennela Kishore, Rao Ramesh, Subbaraju, Pragathi, and others, and the film was directed by Lakshman K Krishna, while the cinematography has done by Suryaa, Music was composed by Mahati Swara Sagar and the film produced by Suryadevara Naga Vamsi under the banner of Sithara Entertainments.

Despite the story, Swathimuthyam is a family entertainer, a lot of Telugu movies in recent times bask the hits with some engaging blocks,if we look at the story then it might get flop, the audience wants engaging entertainment rather than a story, recently Krishna Vrinda Vihari fared well at the Box Office, though the movie has no story, the film has engaging comedy and now Swathimuthyam comes under the same category.

The starts off with a hero and heroine date, where, both liked each other and we get to see their journey, the first half filled with their love story and few comedy blocks apart from that the first half doest offers you anything, makers have failed to establish the conflict in act 1. The second half makes it interesting once the conflict is established and when the hero dealing with all the family members with that point chuckles you for a while and when the flow drops luckily Vennela Kishore takes over and makes us laugh till the climax.

Bellamkonda Ganesh made his debut with this film as an innocent boy he is good while showcasing some emotions we can see in experience in his performance but he managed, Varsha Bollam impressed with Middle-Class Melodies and now she got a well-written role and she performed well and rest of the cast Rao Ramesh, Vennela Kishore, Subbaraju, Pragathi do their best.

Swathimuthyam marks his debut film as director for Lakshman K Krishna, he partly succeeded in making the film and entertaining the audience, the point he discussed in the film is good but the drama he has written around that point should have been much better.

Technically Swathimuthyam is okay as Suryaa’s cinematography is not up to the mark, many scenes were over saturated and grading should have been better and Mahati Swara Sagar’s few songs were good on screens and he made his mark in the background score, and the rest of the technical team did well.

Overall, Swathimuthyam is a decent flick to watch with some engaging blocks.