Surekha Vani Wiki and Biography: Surekha Vani was born on April 29, 1981, in India. She is a well-known actress, model, media personality, and internet sensation in the South Indian film and TV industries. She became well-known by playing funny parts in a number of Tamil and Telugu movies. She has been in movies with almost every famous actor in Kollywood. She and her husband have been on several talk shows together. Vani is in the movie Master right now. 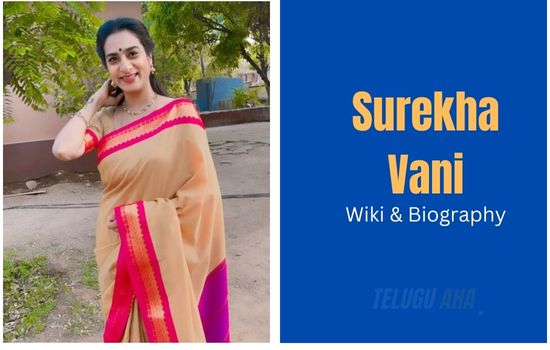 She has always been very interested in and excited about cultural things, even when she was a young child. When she was in the eighth grade, a TV station in Vijayawada asked her to host programmes for kids. She loved anchoring so much that she decided to stop going to school and do it full-time instead.

Surekha Vani was born on April 29, 1981, in the Indian state of Andhra Pradesh. She lives in Hyderabad, which is the district capital of Telangana, India. Based on the horoscope for the day she was born, she is a Taurus. Surekha Vani has been in a number of plays and other cultural events while she was in school.

When she was only in the eighth grade, she began hosting kids’ shows on a cable network in Vijayawada. In a short amount of time, she was introduced as a regular contributor. She and her husband also hosted shows like Maa Talkies and Heart Beat on MAA TV. Then she was in Moguds Pellams, the first movie her husband directed. In 2015, she was in more than 48 movies.

In the 2004 movie Jai Balaji, Surekha Vani made her acting debut. Producer Allani Sreedhar oversaw the work. After that, in 2007, she starred in the Sreenu Vaitla-directed movie Dubai Seenu. In the movie, she plays Seenu’s sister. In the 2010 action movie Namo Venkatesa, Vani made an appearance. She played Prasad’s wife alongside Trisha Krishnan, Venkatesh Daggubati, and Brahmanandam. Alongside actors Mahesh Babu and Sonu Sood, she played the mother of Ajay, the main character, in the 2011 film Dookudu.

Her exceptional acting abilities attract the leading men in the Tamil film industry. She appeared in the movie Sarrainodu with Allu Arjun. Her most recent movie is “Master (2021),” directed by Lokesh Kanagaraj. The main actors were Vijay Sethupathi, Malavika Mohanan, and Joseph Vijay. She portrayed the mother of the abuser in the movie.