Stand Up Rahul Movie Review: Raj Tarun’s latest romantic entertainer has finally been released in the theater today March 18, 2022. after a long gap, Raj Tarun tried something new though the story looks simple the premise of the movie is quite unique and Raj Tarun played a character called Stand Up Comedian, the profession of the protagonist created a curiosity to watch the film and the film have been getting some decent response as Raj Tarun struggling for Hit for the past 5years and I’m sure this film sets out a new journey of Raj Tarun, well let’s see how this movie turned out to be good and it is worth watch movie or not. 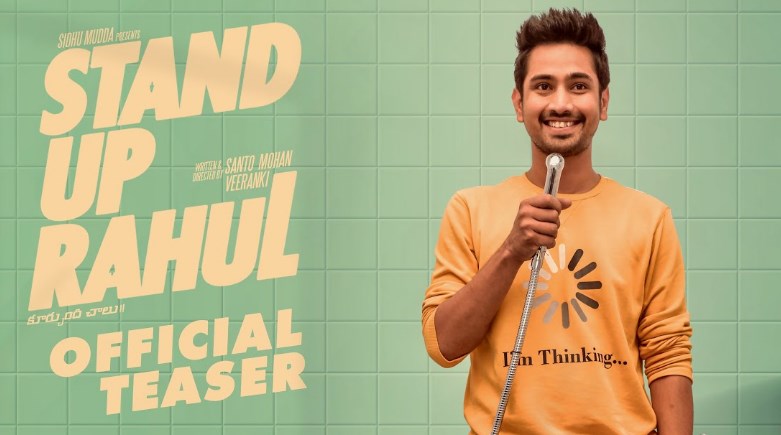 What’s the story of  Stand Up Rahul

Rahul is an easy going guy who is a Stand Up Comedian by profession and he never stands out in his life in every situation, and he always lives by his life with the flow but things take a new turn in his life when he fell in love with a girl Varsha Bollamma and he learns to stand in his life. how his life changed after he fell in love is forms the rest of the story.

Stand Up Rahul starring Raj Tarun and Varsha Bollamma are the main leads in the film and also feature Vennela Kishore, Murali Sharma, Indraja, Devi Prasad, Madhurima Narla, Rajkumar Kasireddy, Tejoy Bhattaru, Venkatesh Maha, Anisha Alla Reddy. and the film is directed by Santo, while the cinematography has done by Sreeraj Raveendran, music composed by Sweekar Agasthi and, the film is produced by Nandkumar Abbineni, Bharath Maguluri under the banner of Dream Town Productions, Highfive Pictures.

Raj Tarun has been struggling over the years for a break. he started his career with a blockbuster hit but he has been getting continuous flops and this film Stand Up Rahul sets some expectations after the teaser got released and everyone feels that Raj Tarun coming up with new content and the trailer raised even more expectations and everyone feels that this time Raj Taru will surely bag blockbuster in his career.

Stand Up Rahul has some flaws if you look at the overall movie, however, you will enjoy the movie partly, as the movie starts off with some interesting scenes and the director takes time to build the hero’s character introduction as we feel that we are going to watch something different film. but within 30min the movie goes into a regular from com format.

Raj Tarun as Rahul is good and performed with confidence and Varsha is good at some parts and rest of the cast did their part well and the technical department has done as per the film requirement. Overall the film is time watch film. if you have nothing to watch then you can give it a try.