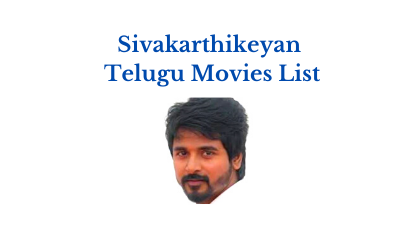 Its not a big thing that an anchor becomes actor or Hero. But, becoming a star in this cine field is very rare. Actors like Shahrukh Khan and Kannada Golden Star Ganesh have proved this a long back. Lastly Sivakarthikeyan from Tamil Cinema belongs to this category, Now he is one of the top actors in Tamil Nadu whose movies business is about Rs.30 Crore. Not only in Tamil, His movies frequently dubs into Telugu, Malayalam, Hindi and Kannada languages and received well.

Sivakarthikeyan started his film career as a show host in Star Vijay TV. Due to of his comedy timing in the anchor role, many filmmakers have identified an actor in him. So, finally made his acting debut in a Tamil film called “Marina” which is a commercial success. Seeing this Actor Dhanush has given him an opportunity in movies like 3, Ethir Neechal and Kaaki Sattai, until he gained a stardom.

His earlier Tamil films are dubbed into Telugu now and available on YouTube for free. However, a few of them are not at available in Telugu due to of the more Tamil nativity. However, we keep tracking of the Sivakarthikayan Movies in Telugu and will sort out here.

Actor Sivakarthikeyan completed shooting for his upcoming films Doctor (2021) and Ayalaan (2022) which will release in 2021 & 2022, the later one needed much graphic work and CG. Currently he is busy with a new project called Don (2021). As these films can easily connect to PAN Indian audience, we can expect these films in Telugu as well. We will notify with the dates once anything happens to Telugu version.

Best of Sivakarthikeyan Movies in Telugu

Coming to the best Sivakarthikeyan movies in Telugu dubbed version, then you should check the below list.