Sebastian P.C. 524 Movie Review: Sebastian once we hear the title we never feel it is a Telugu film and it, even more, holds the feeling after watching the trailers but yes it is a Telugu film. but why do we feel like that, I think the film’s visuals and the premise are quite new to Telugu. and all the trailers have created some interest to watch the movie. as Kiran Abbavaram marks his presence with some unique film in the Telugu film industry and Sebastian is one more unique film that has been released today March 4, 2022, in the theater. 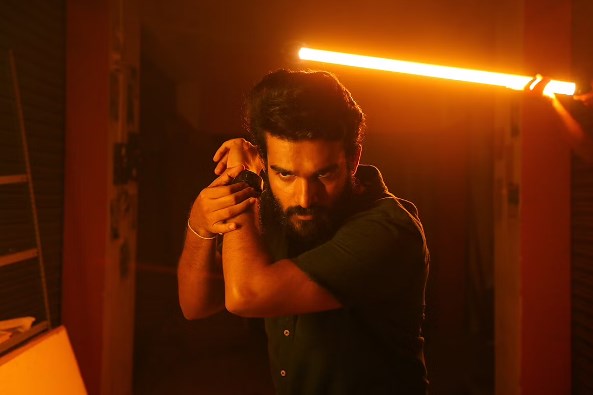 The movie has been getting a great response and audiences are enjoying in the theater. the movie has a perfect blend of comedy and murder investigation. so let us see how this crazy movie turned out to be good and is it worth watching or not.

Sebastian is a constable at Madanapalli village as he has night blindness and no one knows about his night blindness and always tries to cover it up with cooling glasses and he has a love interest in Nuveshka, everything going well but one day his head assigned a night shift at MLA house as he refuses to go but as per the orders he has to go, but the story takes a different turn when a murder happened where Sebastian doing a duty, then he becomes the responsible for that murder and he got suspended, after that he starts his own investigation, finally who was behind this murder? will Sebastian solve the case form the rest of the story.

Sebastian starring Kiran Abbavaram and Nuveshka are the main leads and also Srikanth Ayyenger playing a prominent role in the film, and the film is directed by Balaji Sayyapu Reddy while cinematography handled by Raj K Nalli and music composed by Ghibran and the film produced by Sidda Reddy B, Raju, Pramod under the banner of Prime Show Films.

Well Sebastian is quite a new experience in the theater and the film starts of slowly and the first half of the movie engages with some comedy bits after the once murder happened the film starts engaging and later second half quite a bit dragged and again when the twists are unfolding at the pre-climax will make some interest.

Kiaran Abbavaram is good his dialogue diction has to improve but he makes us laugh at some points and the rest of the cast is did their part well.

Sebastian is partly good but it is a worth watching movie with some over stretched scenes.