Sankranti Holidays in Telangana 2023: Sankranthi is one of the most significant festivals for Telugu people. Especially, all the kids and college students will eagerly wait for the Sankranthi holidays every year. However, talking about this 2023 Sankranthi, all the governments and private schools have declared five days of holidays from January 13 to 17, 2023, and schools and colleges will reopen on January 18, 2023. 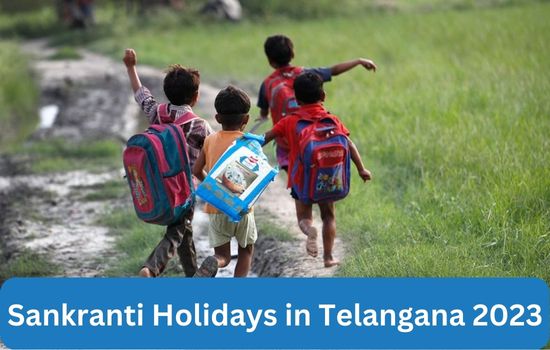 Sankranthi holidays will be applicable for schools except for missionary schools. Missionary schools had granted the Christmas holidays, however, Telangana Intermediate State Board has already declared the holidays for junior colleges from January 13 to 17, 2023.

All the respective authorities have issued orders to keep their classes suspended during these holidays. All the colleges will be re-opened on January 17, 2023, and schools will reopen on January 18, 2023.

Sankranthi is one of the most important festivals for all the Hindu people, and after the festival called Dasara, the number of holidays will be declared for Sankranthi only and this is one of the reasons for all the students and staff will excite for this holiday to take a break from their regular life.

Andhra Pradesh government has made changes to the Sankranti holidays. The education department issued an order on January 7 that the government has taken a decision to change the holidays based on the request of the teacher’s unions. According to the academic holiday calendar announced this year, the school education department has earlier decided to give Sankranthi holidays from January 11 to 16. However, regarding the change in the Sankranthi holidays, the teacher’s unions recently appealed to Education Minister Botsa Satyanarayana. In the background of January 17th, holidays have been changed from 12th to 18th. Schools will resume on the 19th.