Sankranthi 2022 Telugu Movies Release Updates: Movie Lovers going to have a Big Treat Entertainment on this Sankranthi 2022. Almost All Top Tollywood Stars are getting ready to Release their Films on this Festive Day. Here we are Giving you all the details of Upcoming Coming Movies that are Specially releasing on Sankranthi 2022. 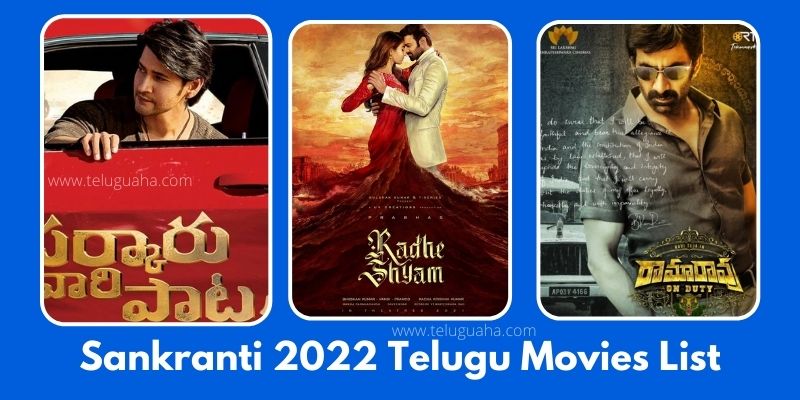 Mahesh Babu Starring Sarkaaru Vaari Paata is the most awaited film. Parasuram is directing this film. First time in Telugu Cinema, this Movies Music rights were sold at a whopping rate of 4.5 crores to Saregama. National Award Actress Keerthi Suresh is playing the lead role. Buzz is that it is going to be a Message Oriented movie.

Title of Upcoming Movie of PawanKalyan and Rana Daggubati isn’t Confirmed. This is the remake of Malayalam Movie Ayyappanum Koshiyum 2020. Pawan Kalyan is the playing the role of Police officer name Bheelyanakay. Recently Pawan’s look poster has been viralled in social Media.

F3 is the Family Comedy Drama Entertainer and also the most awaited Movie in Recent times. Venkatesh and Varun Tej playing the lead role while Anil Ravipudi is directing this Movie. Though it is not the continuation of F2 movie, it is seemed as a sequel by viewers.

Tamil star Thalapathy Vijay’s 65th Movie Beast is also one of the Most Awaited Movie in South India. It is the Biggest Budget film producing by Kalanithi Maran Under banner of Sun Pictures. Nelson Dilip Kumar is the Writer and Director while Pooja Hegde is playing the Female lead in this movie.

Rebel Star Prabhas and Pooja Hegde Starrer Radhe Shyam a Pan India Movie. Story seems very interesting and Unique as story revolving around Reincarnation and Movie is set in 1970’s in Europe. Since 4 years this film is in making. Nagesh Kukunoor is the Director while Produced Jointly by Bhushan Kumar, Pramod, Vamsi and Praseedha.

The above Movies are Confirmed to Release on Sankrathi Festive Day But there are also Some films which are Expected to release. Ravi Teja’s Rama rao on Duty is in Shooting shedule and Recently poster was also released. Sarath Mandava is the Director and Sudhakar Cherukuri is the Producer of it.

Nani’s Ante Sundaraaniki, Akkineni’s Agent, BalaKrishna’s Akhanda,  and Nagarjunas Bangarraju is Expecting to release on Sankranthi. But None of these film makers have confirmed about it. Buzz is that As Big Stars Movies already Confirmed, these Pictures may release before are after sankranthi.