RRR Movie Review: A much-awaited movie RRR has finally released today March 25, 2022, and without any doubt its been shaking theaters all over the world. Bahubali has broken the language barriers and that has set a new standard for Telugu Film Industry, all the credit goes to non-other than S.S. Rajamouli and we all know his vision has no limit, after Bahubali every actor wants to work with Rajamouli, however, he chooses his actors according to the story and now he made RRR. 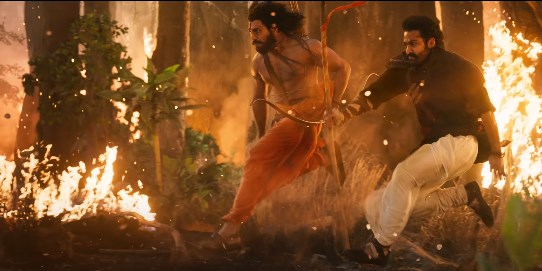 Telugu Film Industry’s biggest superstars Ramcharan and Jr.NTR to make a film with them as multi-starter it’s not an easy task, because fans have some another level of calculations, and Rajamouli is the only director who can balance their stardome and who can satisfy their fans. and today the world has been witnessing the magnum opus film. so let’s dive into the review, how this movie turned out to be good and whether the movie is worth watching or not.

What’s the Story of RRR

Story is set in a pre-independence where Rama Raju(Ramcharan) who works for the British Government and Bheem(Jr. NTR) whos is a protector of Adilabad Gond Tribe, when a British governer called Scott brought a Gond Tribe little girl with him and story takes a different turn when Bheem fights with Britsih government and Rama Rama Raju appointed as a hunter to catch Bheem, however, both became best friends in the tale. so finally how both became freedom fighters is the rest of the story.

India’s top director S.S. Rajamouli and Telugu biggest superstars Jr.NTR and Ramcharan, this combination is enough to shake the Box Office and that’s what happening at the theaters, movie has been getting an unbelievable response from all over the world.

Rajamouli films strong characters and emotions play a key role and this film also same, though the movie has brilliant sequences in many scenes you will get goosebumps, on top of that from the start to end the emotion will drive you.

As I said before Rajamouli has brilliantly balanced both Ram and Bheem’s characters. as we all know he is the expert in elevation scenes and this film has even more scenes but whats new in this film is every scene will drive you with emotion.

Ramcharan as Ramaraju is just brilliant as you will witness his hard work for his makeover and he is just brilliant in every aspect and Jr.NTR as Bheem undoubtedly no could play Bheem character other than his, his hard work and his dedication will appear on the screen and he mesmerizes you in emotional scenes and Alia Bhatt as Sita simply superb though her role has less screen space the impact is more.

Cinematographer Senthil Kumar as usual done a brilliant job like all Rajamouli films do and M.M Keeravniis the biggest backbone of the film always gives great music for Rajamouli films and other departments done well as Rajamouli’s requirement.

Finally, RRR is a visual feast for not only fans, all the cinema lovers will enjoy the movie, though the run time of the film is 3 hours above but once the movie starts you will forget about the duration.