Recce Web Series Review: Zee5’s Telugu original period action thriller Recce, the series has raised the expectations after the trailer release, right now there is original content coming from Telugu and recently Telugu web series called Gaalivaana has got a great response, which was also backed by Zee5 and now the Recce’s turn the series has premiered June 17, 2022, on Zee5 and without any delay let’s delve into the review. 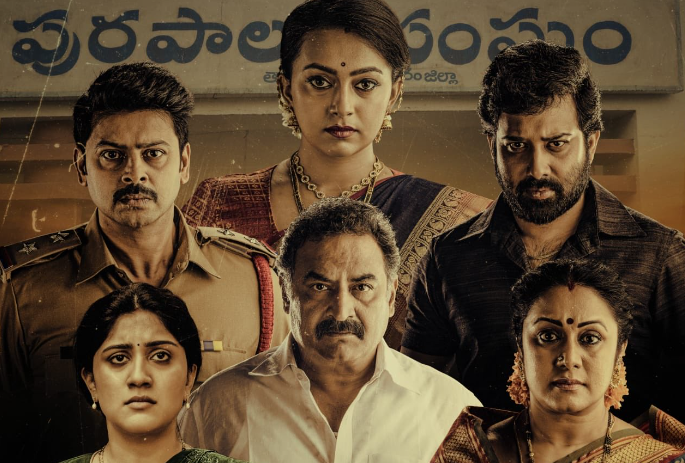 The recce story is set in 1990, when municipal elections were held in Tadipatri and a municipal chairman Varadarajulu(Naren) got murdered, very moment Tadipatri village atmosphere has changed and the story cut to after 3 years where a newly appointed SI Lenin(Sriram) starts investigation of Varadarajulu case and during the investigation, he delves into the dark reality of Tadipatri,, Finally, who is the murderer? to this, you need to watch the series.

Recce’s major advantage is the premise to bring the audience into the movie or web series world the premise and mood is the most important aspect and the Recce team has done a brilliant job in bringing the dark mood, Recce doesn’t offer you a new story but what made Recce is engageable is the interesting screenplay and well-designed charters.

The series starts off well, the director made a clever job as he didn’t waste the time establishing the plot in the first episode he established the conflict and it makes you watch the remaining episodes, the 7 episodes of this series have a lot of shades and every episode treatment was so well but few episodes are a bit overstretched and makers cleverly managed with some scenes though those scenes are not added anything to the story.

We have seen many political backdrop movies but to make a series on this point it’s not easy to engage the whole series, amidst drawbacks the series has a lot of twists and turns which are placed so well.

Sriram as Lenin did a decent a job but the character is not so challenging as the character design itself is flat, Siva Balaji has no scope to perform, and Danya Balakrishnan, Adukalam Naren all the characters did their best

Poluru Krishna has done a decent job as he succeeded in engaging the audience to some extent but the writing could have been stronger, just because of the poor writing the characters look so flat.

Finally, Recce is an engageable series, and if your fan of action thrillers then you must give it a try streaming on Zee5.