Dhamaka movie OTT Release Date, Cast, OTT platform, Time, Trailer, and many more details can be checked in this article. Dhamaka digital rights are acquired by Netflix and it will be released on January 22, 2023.  Ravi Teja, a mass Maha Raja in the Tollywood film industry who has been entertaining with his different movies and subject, is coming up with a new film titled Dhamaka. On the occasion of the Dussehra festival, the filmmakers have revealed the film title and first look of the film as well. Thrinada Rao is directing this movie, and the movie is all set for Dhamaka on December 23, 2022. The film Dhamaka with the tagline-Double Impact. Vishwa Prasad is going to produce this movie under Peoples’ Media Factory and Abhishek Aggarwal Arts. 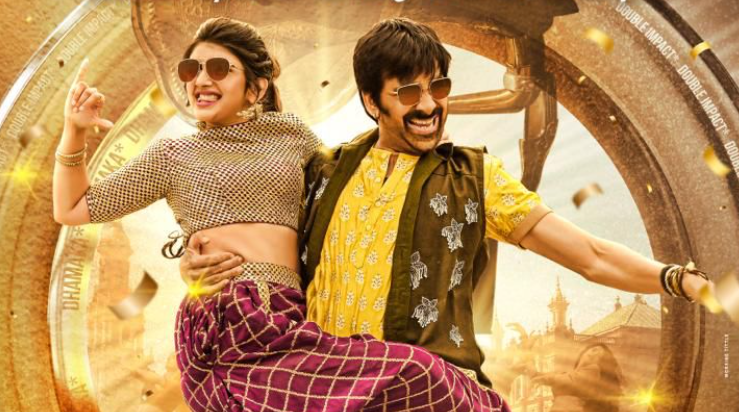 Dhamaka’s songs have made headlines; each song has become a chartbuster, beginning with the first single, “Jintak,” in which Raviteja’s Vikramarkudu mannerism is one of the song’s plus points, and the song composition was pretty nicely done by Bheems Ceciroleo; he used Telangana flok style in almost every song; the second single, “Mass Raja,” is another catchy song, and in this song,  and in this song, Ravi Teja’s energy is unmatchable, the third song is a melody called What’s happening which is okay but the other song which was most recent release called Dandakadiyal and again Ravi Teja and Sri Leela’s energy is unmatchable.

The triumph of the Krack movie was enjoyed by Mass Maha Raja and Tollywood actor Ravi Teja. Khiladi was another disaster for him, but he now seems quite optimistic about this movie, Dhamaka. The 69th movie starring Ravi Tejas, which Trinadha Rao Nakkina is helming, will hit theatres on December 23, 2022, after wrapping up post-production. Thanks to Ravi Teja, the promotions have already started.

Dhamaka movie digital rights are bagged by Netflix and the film will be released on January 22, 2023. Sreleela, the Kannada beauty made her Tollywood debut with Pelli SandaD from then on she become a crazy heroine, and carrying the crazy she has signed for many films in Telugu and Dhamaka is one among them apart from Dhamaka she is been a part of  Anaganaga Oka Raju with Naveen Polishetty and Kannada and Telugu bilingual film Junior starring debutant Kirity Reddy who is a son of politician Gaali Janardhan Reddy, however, she is also been a part of some untitled films.

Ravi Teja has solid movies in his pipeline, and Dhamaka is one of them. Apart from Dhamaka, he is roped in for an important role in Chiranjeevi‘s Waltaire Verayya as Vikram Sagar, the ACP. Not only fans, but all the moviegoers have been waiting to see them together on screen, and it will be a never-before-seen experience for fans. The film will hit the screens on January 22, 2023.

With Sudheer Varma, Ravi Teja has worked on movies like Raavanasura and the all-Indian Tiger Nageshwara Rao. Speaking of Dhamaka’s digital rights, there isn’t any information available now, but we can anticipate all the details following the film’s theatrical premiere, so stay tuned.

When is Dhamaka Movie OTT Release Date and Time?

Dhamaka will be available for streaming from January 22, 2023.

Where can we watch Dhamaka Movie?/ Where Can I see Dhamaka?

Theatres, Dhamaka Movie will hit the screens on December 23, 2022

Is Dhamaka Movie hit or flop?

Hit, Dhamaka Movie has got a brilliant response.

Yes, Dhamaka will be available on Netflix soon.

Dhamaka is billed as an out commercial entertainer as the film is going to hit the screens on December 23, 2022.