Ravi Kishan Wiki and Biography: Ravi Kishan is an Indian actor and movie producer. He was born in Bombay, Maharashtra, India, on July 17, 1969. As a member of the Lok Sabha, he speaks for the city of Gorakhpur. Ravi Kishan usually makes movies in Bhojpuri, Hindi, or Telugu. He has also been in Hindi and English movies, as well as Tamil and Kannada ones. He came in second place on Bigg Boss in 2006. 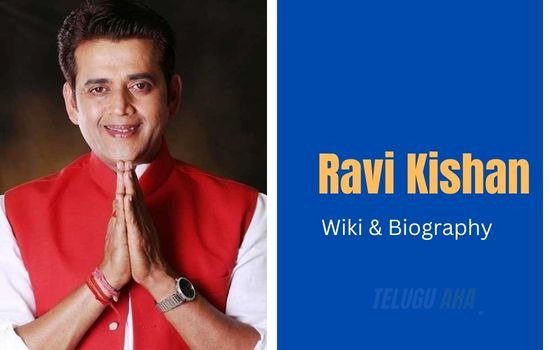 In Bombay, Maharashtra, India, on July 17, 1969, Ravindra Shyamnarayan Shukla was born. Pt. Shayam Narayan Shukla and Jadavati Devi had a big impact on how he grew up. Some sources say that Ravi Kishan got his bachelor’s degree in commerce from the Rizavi College in Mumbai. Ravi Kishan and his family lived in Kerakat in the Jaunpur district of the Uttar Pradesh state of Varanasi for almost seven years. He was always very interested in the entertainment business. We still don’t know everything about his early life.

Ravi Kishan appeared on a number of shows as a guest star over the years. He hosted the reality show Raaj pichhle Janam ka on NDTV Imagine and a number of shows on the Mahua Bhojpuri channel. Some of the biggest names in Bollywood, like Mani Ratnam and Shyam Benegal, worked with him.

Ravi Kishan dubbed the part of Spider-Man played by Toby Maguire in the third movie into Bhojpuri in 2007. This made it the first Hollywood blockbuster to have a Bhojpuri voice dub along with the usual Hindi, Tamil, and Telugu voice-dubs in India’s film dubbing industry.

Pitambar, Ravi Kishan’s debut movie, came out in 1992. As a contestant on Bigg Boss, he got a lot of attention and, in the end, came in second place. At the 2008 ETV Bhojpuri Cinema Samman, he won the award for Most Popular Actor. Reality shows like Ek Se Badhkar Ek – Jalwe Sitaron Ke helped him become the most popular person on Indian TV.

In 2008, he was a host on the Zee shows Naman: Ek Sansani and Ek Se Badhkar Ek – Jalwe Sitaron Ke. He was also a co-host on the reality dance show Bathroom Singer. Ravi Kishan was the host of the reality show Raaz Pichhle Janam Ka on NDTV Imagine for two years. In 2010, he worked on films with both Shyam Benegal and Mani Ratnam.

In 2012, he took part in the fifth season of Jhalak Dikhhla Jaa. Ravi Kishan ran for office in the district of Jaunpur in the state of Uttar Pradesh as a member of the Indian National Congress. He ran for office in the 2014 midterms and got 4.25 percent of the vote, which put him in sixth place. Ravi Kishan used to be a member of the Congress Party, but in 2017 he switched to the BJP. He is the Member of Parliament (MLA) for Gorakhpur in the Indian parliament’s lower house.