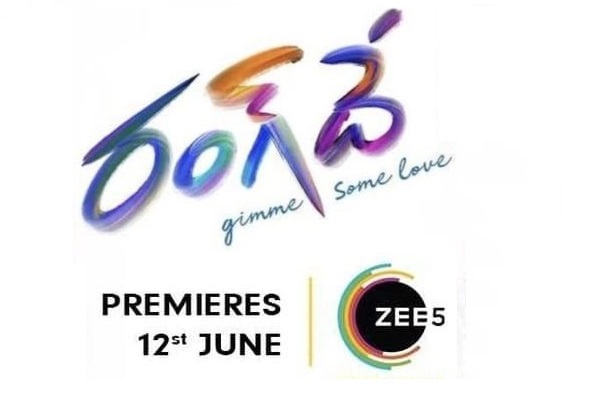 Directed by Venky Atulri the project is bankrolled by Sithara Entertainment and has music by Devi Sri Prasad. Apart from featuring Keerthy Suresh and Nithiin in the lead, Rang De also stars actors Sai Kumar, Naresh, Kausalya, Rohini, Brahmaji, Vennela Kishore and Vineeth among others. Veteran cinematographer PC Sreeram is the DOP of this film, while Naveen Nooli is on board as the editor for the venture.

Before the digital debut of Rang De, Nithiin’s Check movie is gearing up for the OTT Release on SUN NXT. while Rang De digital streaming rights bagged by ZEE5. Rang De is the second release for Nithiin in 2021 while three movies finalized for theatrical release in 2021.

Anu(Keerthy Suresh) and Arjun(Nithin) are two childhood friends who share a love and hate relationship. Anu loves Arjun but he hates her. In a tragic turnaround of events, they get married and life changes for Arjun. Things become even worse when Anu announces her pregnancy. What will Arjun do now? How will the couple resolve their differences? That forms the rest of the story.

The movie will be available in OTT platform “ZEE5” once after its theatrical screening. As always, we will keep you updated on the future of Rang De and the official release date for the movie if anything changes. Stick with Cine List to collect more information about this.

Latest sources suggest that ZEE5 India will stream Rang De on June 12, 2021. Official confirmation will be soon from their platform. Nithiin was last seen in Chandrasekhar Yelet’s Check, The movie had its digital premiers on May 14, 2021 in SUN NXT. Apart from Rang De, he is also playing the lead role in the Telugu remake of 2018 Bollywood movie Andhadhun.