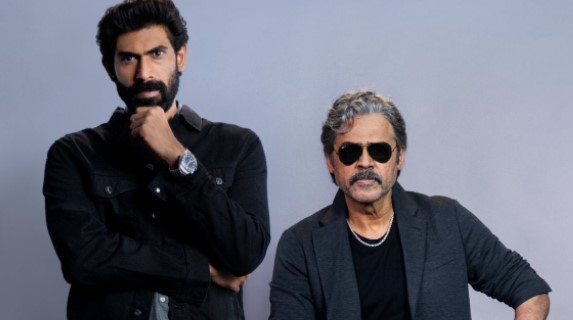 Rana Naidu is a Crime Web Series. It is and Adoption of American Web Series Ray Donovan. In this Series Story Revolves around Ray Donavan and his Activites. He usually Solves the Problems Privately of Influential and Rich Peoples.

Venkatesh Said that he is fan of Ray Donavan and was eager to play this role. At present Venkatesh is busy with F3 and Rana with Virata Parvam. After these both movies gets release. This Rana Naidu may soon release on Netflix.

Rana Naidu Web Series Digital Rights were Purchased by Netflix. Release dates aren’t confirmed by the Makers. But on 22 September 2021, Netflix announced that Venkatesh and Rana both are together in their Show.

Rana Naidu may not gone on Floors full or Shooting may not have fully Completed. Other Cast and Crew details are yet to come. Victory Venkatesh’s F3 Postproduction is being done and Rana’s Virata Parvam is about to release. After both of these movies gets release Rana Naidu will go on Floors in making.

The trailer for Rana Naidu has not been made public yet. You can watch the Hindi teaser below, we will update the Telugu teaser once it is published.

When is Rana Naidu OTT Release Date and Time?

Not Declared, Rana Naidu movie team is yet to announce the date.

Not announced, Rana Naidu movie team are yet to announce.

Is Rana Naidu hit or flop?

Not declared, Rana Naidu movie is yet to release in theatres.

Yes, Rana Naidu will be available on Netflix very soon.