Ramabanam movie OTT Release Date, OTT platform, Cast, Time, Trailer, and many more details can be checked in this article. Ramabanam is expected to hit the screens on May 31, 2023. The combination factor plays a key role in grabbing the audience’s attention be it hero and heroine or actor and director. There are some combinations in Tollywood that excite moviegoers like Chiranjeevi-Vijayashanthi, Venkatesh- Soundarya, and the coming actor and director SS. Rajamouli-Prabhas, Trivikram-Pawan Kalyan, and Sriwas- Gopichand, now the hit combo is back with a new flick called ‘Ramabanam’. 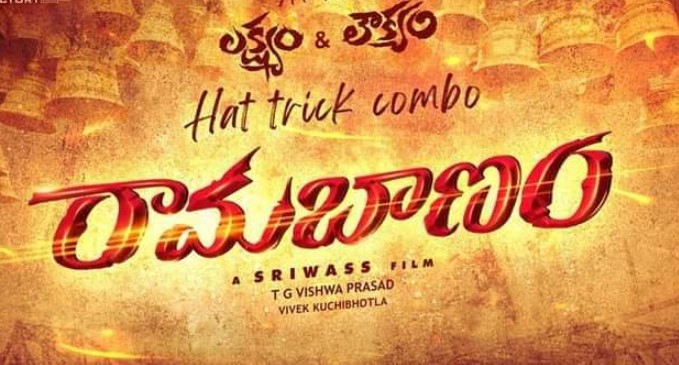 Sriwas and Gopichand have teamed up before with films called ‘Lakshyam’ and ‘Loukyam’ and now Ramabanam marks their third collaboration, however, the first title poster has unviled by the makers as part of the Sankranthi festival, however, before it’s official, the title was revealed by Nandamuri Balakrishna on the show called Unstoppable with Prabhas and Gopichand and Gopichand and producers expressed their happiness about revealing the title by Balakrishna. Despite the fact that Ramabanam is produced by Dhamaka producer TG. Vishwa Prasad and planning to release the film in May 2023.

Ramabanam’s principal photography began in early 2022 and it had held for a while because Gopichand had to promote the film called Pakka Commercial helmed by Maruthi and currently it is streaming on Aha Video. However, Ramabanam’s 90% shoot has been done and the remaining 10% of the shoot will be wrapped by January end and the film’s post-production work is expected to finish in March from then on makers starts promoting the film.

Gopichand will be seen in a different role when compared to his films with Sriwas and he was seen in a boy next door roles in Lakshyam and Loukyam but in Ramabanam is completely different, makers have said that Goopichan character is the surprise package. However, the film is expected to hit the screens in May 2023, and let’s see how it’s turned out.

Ramabanam ott release date is tentatively 31, July 2023 but the Digital rights details haven’t announced yet. Gopichand has been doing back-to-back films but he hasn’t gotten a solid blockbuster since Loukyam which was released in 2014 and from then on he did almost 7 films like Jill, Soukhyam, Goutham Nanda, Oxygen, Pantham, Chanakya, Seetimaar, Aradugula Bullet, and Pakka Commercial, except Jill, Goutham Nanda and Seetimaar ended as average and remaining films were ended as flops.

Gopichand hopes in Ramabanam only and the audience and his fans are also ahs some hope in this combination, let’s see how it’s turned out. Well, talking about Ramabanam’s digital rights, as of now there is no information about who acquired the digital rights as the film is expected to hit the screens in May 2023 and we can expect all the details to be revealed after the theatrical release until then stay tuned with us.

Sriwass made his debut with the film called Lakshaym and he basked in the solid hit after that he made very few movies and his last work was Saakhyam starring Bellamkonda Srinivas which was released in 2018. After four years he is back with this film called Ramabanam.

Ramabanam has an ensemble cast as Jagapathi Babu has worked with Sriwas with the film called Lakhsyam and he is now busy with multiple films across the languages, Khushboo playing Gopichand’s sister in law and she was recently seen in Varasudu starring Thalapathy Vijay and helmed by Vamsi Paidipalli, Jagapathi Babu playing a brother role for Gopichand, he was also a brother in Lakshyam as well. After Khiladi, this film marks her second film for Dimple Hayathi and talks about Ramabanam’s OTT release date as there is no information and we can expect the OTT release date after the 6 weeks of theatrical run.

Ramabanam makers haven’t revealed what the story is about and as per the sources, the film is touted to be a family action drama where we can see Gopichand in a different role.

Gopichand plays the main lead and Dimple Hayathi plays the female lead, Jagapathi Babu, Khushbo, and others, and the film is directed by Sriwas, cinematography has done by Vetri Palani Swamy, music is composed by Mickey J Meyer, editing takes care by Prawin Pudi and the film is Produced by TG Vishwa Prasad and Vivek Kuchibhotla under the banner of People Media Factory who basked the blockbuster with the film called Dhamaka starring Ravi Teja and the film is currently streaming on Netflix.

Ramabanam makers haven’t dropped the trailer yet and we can expect the trailer to be dropped very soon.

When is Ramabanam OTT Release Date and Time?

Not Declared, Ramabanam movie makers have not yet announced.

Where can we watch Ramabanam?/ Where Can I see Ramabanam?

Theater, Ramabanam movie will hit the screens in May 2023.

Not Declared, Ramabanam movie makers have not divulged yet.

Is Ramabanam hit or flop?

Not Declared, Ramabanam movie has not been released so we can not say Hit or Flop

Is Ramabanam Movie available on Netflix?

Is Ramabanam available on Prime Video?

Is Ramabanam available on Aha Video?

Is Ramabanam Movie available on Hotstar?

Ramabanam is billed as a family action drama that is expected to be released in May 2023.