Rama Rao On duty Movie OTT Release Date: Maass Raja Ravi Teja’s Rama Rao on Duty is all set to release on the occasion of Sankrathi in January 2022. Sharath Mandava is directing this movie while produced by Sudhakar Cherukuri Under banner of Sri Lakshmi Venkateshwara Films. OTT Release dates of this film aren’t announced officially. 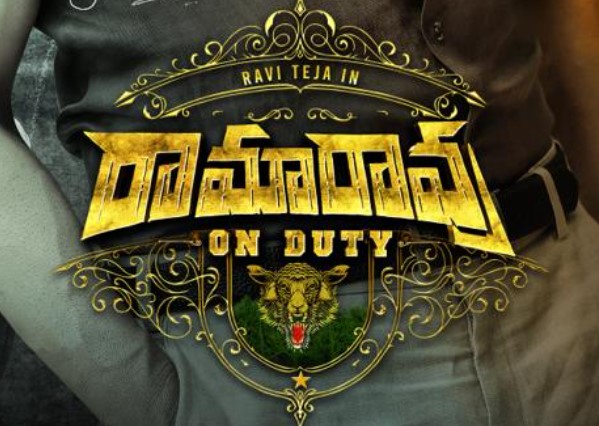 Ravi Teja is going to play the role of Cop. Much story is not out. By the Motion Poster we can assume that Ravi Teja has promised to abide by the rules and regulations of the duty. An Oath signed by Rama rao (Ravi Teja) can be seen in the Motion Poster.

Malayalam Actress Rajisha Vijayam and Majili’s fame Divyanka Koushik are playing the Female lead roles in this movie. After a Long Gap of 8 Years Actor Venu is Back with this film. He is also Playing the crucial role.

Rama Rao on Duty is going to be 68th Movie for Ravi Teja in his Career. Earlier ravi teja has played a powerful cop role in Vikramarkudu Many are expecting the same from this Picture also. Sam CS composed Music and Cinematography is done by Satyan Sooran.

Makers are planning to release this Movie on the occasion of Sankranthi 2022 directly in theatres. Digital Rights Details of this movie aren’t announced officially. Along with this another movie of Ravi Teja’s Khiladi is also in line to release.

If Every thing goes well in Releasing of this Rama rao on Duty in January 2022 then OTT Release can be expected around March / April 2022. Buzz is that Movie is completely going to be a suspense thriller action one.

Watch Movies only in Theatres or on OTT’s. Keep Visitng our website for Updates on Latest Movies OTT’s releases, satellite rights, Reviews and Many more.