Ram Charan Wiki and Biography: Konidela The full name of Ram Charan is Ram Charan Teja. He was born on March 27, 1985, in Madras, Tamil Nadu, to a family of actors. Ram Charan, the son of the South Indian movie star Chiranjeevi, is also a well-known actor in his own right. Allu Arjun’s aunt is Surekha, who is the mother of Ram Charan. Using this rule, Allu Arjun and Ram Charan are each other’s second cousins once removed. Pawan Kalyan is related to Ram Charan, and another uncle, Nagendra Babu, works in the movie business as a producer. 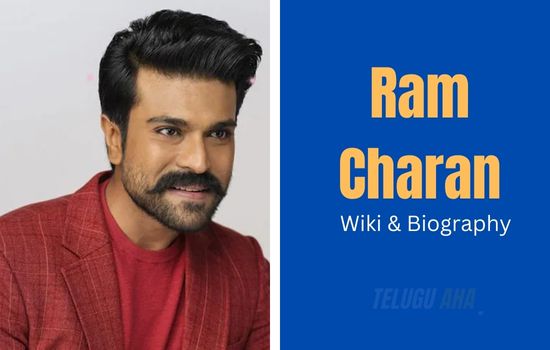 Ram Charan has two sisters named Shreeja and Sushmita. Allu Ramalingai, Ram Charan’s grandfather on his mother’s side, was also an actor and comedian who was in around a thousand movies. He worked as a doctor and joined the Quit India Movement to help get India to be free. Because of this, he was also sent to prison. His childhood nickname, “Cherry,” has stuck with him all his life. Ram Charan grew up watching his father and uncles in movies, so he always knew he wanted to do what they did.

In his early years, Ram Charan went to a number of well-known universities. His formal education began at Padma Seshadri Bala Bhavan in Chennai. He then went to Lawrence School in Lovedale and The Hyderabad Public School in Begumpet before finishing at St. Mary’s College, which is one of the best colleges in Hyderabad. He decided to try acting because he had worked in the movie business before. After he saw how talented he was, he moved to Mumbai, Maharashtra, to study acting at Kishore Namit Kapoor’s institute.

When he got to India, he had an audition for a movie in which he would end up being the main character. The action movie Chirutha came out in 2007. The movie got a lot of attention because it was the acting debut of Chiranjeevi’s son. In addition to Ram, Allu Arjun, Pawan Kalyan, and Chiranjeevi did a lot to promote this movie. Even though the movie only cost 15 crores to make, it made an amazing 29 crores at the box office, making it a huge hit. Also, the movie was shown in several South Indian theatres for more than three months. The Best Debut Male Award from Filmfare was given to him because of how well he did in Rams.

Ram Charan’s first role in a Telugu movie was in Puri Jagannadh’s 2007 film Chirutha. Ram Charan’s performance may have had a lot to do with the movie’s critical and financial success. He won both the Nandi Special Jury Award and the Filmfare Best South Debutant Award for the same movie.

Chirutha may have told people about Ram Charan’s entry, but Magadheera solidified him as a possible Hollywood heavyweight. The movie directed by S.S. Rajamouli did very well at the box office. In this movie, he showed off his skills at dancing, acting, and riding horses.

The Telugu Filmfare Award for Best Actor went to Ram Charan for his work in this movie. After Magadheera did well, Ram Charan starred in Orange and worked with director Bommarillu Bhaskar again. In the 2010 movie about an Indian who had moved to Australia for good, he played an Indian who was not living there (NRI). The movie did well, and people seemed to like Ram Charan’s performance. In the 2013 action-drama film Naayak, Ram Charan and Kajal Aggarwal and Amala Paul each played two different roles.

Ram Charan makes his Bollywood debut in Zanjeer, the remake of Amitabh Bachchan’s 1973 classic of the same name. Even though Priyanka Chopra played an important part in the movie, critics didn’t like it and it didn’t do well at the box office. Even Thoofan, which was remade in Telugu, did badly at the box office. The actor’s performance in Vamshi Paidipally’s Yevadu in 2014 more than made up for the failures of his previous movies. Amy Jackson, Allu Arjun, and Kajal Aggarwal also played roles in the movie, which was a hit at the box office despite getting mixed reviews.

His other movie from that year, Govindudu Andarivadele, also did well at the box office. In its first weekend, it made more than 40 crores INR. Ram Charan was only in one movie in 2015, Bruce Lee: The Fighter by Sreenu Vaitla. The box office earnings and reviews for the movie, which also starred Arun Vijay, Kirti Kharbanda, and Rakul Preet Singh, were about average. Dhruva by Surender Reddy is another of his 2016 movies. Some of his other movies are Rangasthalam (2018), Vinaya Vidheya Rama (2019), and Syeraa Narasimha Reddy. Besides RRR and RC-15, he has the movies Acharya (2019) and Vinaya Vidheya Rama (2020) coming out.