Popcorn OTT Release Date: Tollywood is making noise with different content, be it new director or established they make sure that story should be different and grab the audience. However, there are few medium-budget films made in Telugu and praised for their execution and now another movie is going to join the club the film is called ‘Popcorn’ helmed by Murali Gandham and Produced by Bogedndra Gupta, however, the film will hit the screens on February 10, 2023. 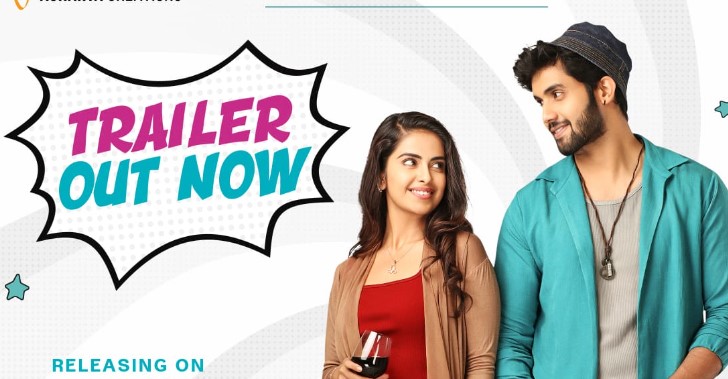 Popcorn’s trailer launch event was held in Annapurna Studios and Akkineni Nagarjuna graced the event. After watching the trailer Nagarjuna said that the trailer looks interesting and captivating and he extended his wishes to the team of Popcorn. The popcorn trailer went viral within no time and crossed 1 million views, however, the film is expected to hit the screens in February 2023.

Popcorn’s story hasn’t been revealed by the makers but as we go by trailer the story revolves around a shopping mall where a bomb blast happened in the mall and strangers struck a lift, they seek help for someone but they couldn’t get any help. Left with no option they struggle to breathe and finally, how they will survive and will then get out from the lift forms the rest of the story. Sai Ronak will be seen as the young and energetic guy who works for a popular TV channel and Avika Gor met him in a Shopping mall.

Sai Ronak plays the main lead and Avika Gor plays the female lead, other cast details are yet to be anounced by Popcorn makers and once they are announced we will upload them here.

The film is written and directed by Murali Gandham, Cinematography has done by MN Bal Reddy, Music has done by Shravan Bharadwaj, KSR is the editor, Bhaskar Mudavath is the art director, DI by Pankaj Haldar, and the film Produced by Bhogendra Gupta under the banner of Acharya Creations in association with Avika Screen Creations.

Popcorn is under post-production and the team Popcorn working hard to finish the post-production work. However, Popcorn makers are planning to release the film in February 2023, however, they haven’t revealed any precise date for the film. Avika Gor started her production called Avika Screen Creations and she is producing the film too. During the trailer launch, Nagarjuna said that Avika was introduced through Annapurna Studios with the film called ‘Uyyala Jampala’ and I’m happy that she started her own banner.

Sai Ronak was introduced with a film called ‘ Pathasala’ which was released in 2014, later he did many films but he rose to fame with ‘Pressure Cooker’ which was released in 2020. In 2022 he appeared in a film called Ante Sundaraniki’ helmed by Vivek Athreya’ and a web series called ‘Odela railway Station’ helmed by Sampath Nandi and which was directly released in Aha Video. However, his upcoming film is only Popcorn and the trailer looks promising and intriguing and hope this film brings another success to him.

Popcorn’s story happened in a shopping mall and that too in a lift, it’s quite challenging for a director to hold audience’s attention. Popcorn lift point reminds Srikanth and Raasi’s ‘Suprabatham’. However, Popcorn digital rights details are not available right now and all the information will be available after the theatrical release until then stay tuned with us and once we get the official confirmation we will update you.

Avika Gor was introduced to Tollywood with the film called ‘Uyyala Jampala’ starring Raj Tarun and after that, she did many films and another Raj Tarun film called Cinema Chupista Mava made her a notable heroine but after that, she did many films and all films were a flop. However, she was seen in 2022 with some films like 1oth Class Diaries and Naga Chaitanya’s Thank You, and apart from Popcorn, she has films like Kahani Rubberband ki and 1920 Horrors Of The Heart.

Popcorn looks quite interesting and Avika Gor seems quite confident during the trailer launch and hopes this film brings success to her. However, the Popcorn OTT release date hasn’t been anounced yet as its too early to anounce and Popcorn makers haven’t even anounce the theatrical release date, however, all the information will be revealed after the theatrical release and the film is expected to hit the screens on February 10, 2023.

The popcorn trailer was launched by Akkineni Nagarjuna and the trailer looks interesting and the plot looks even more interesting. this seat edge thriller will surely connect to the audience. However, the film is expected to hit the screens in February 2023. If you want to watch the Popcorn trailer then you can watch it here.

When is Popcorn OTT Release Date and Time?

Popcorn will be available for streaming on the OTT platform after the theatrical release.

Where can we watch Popcorn?/ Where Can I see Popcorn?

Is Popcorn hit or flop?

Not Declared, Popcorn has not been released so we can not say Hit or Flop

Is Popcorn available on Netflix?

No, Popcorn movie is unavailable for streaming on the Netflix OTT platform form.

Popcorn movie is billed as a drama thriller that is going to hit the screens in February 2023. Sai Ronak and Avika Gor seem quite confident about the project and hope this film does well and bring success to them.