Pogaru OTT Release Date in Telugu & Digital Rights: Kannada actor Dhruva Sarja latest film Pogaru Telugu rights are acquired by Sai Surya Entertainments for over Rs.3 crores. The movie has got a lot of hype after the release of Karabuu song which is the most viewed Kannada song in 24 Hours. The movie will release simultaneously in Kannada and Telugu in 2021. 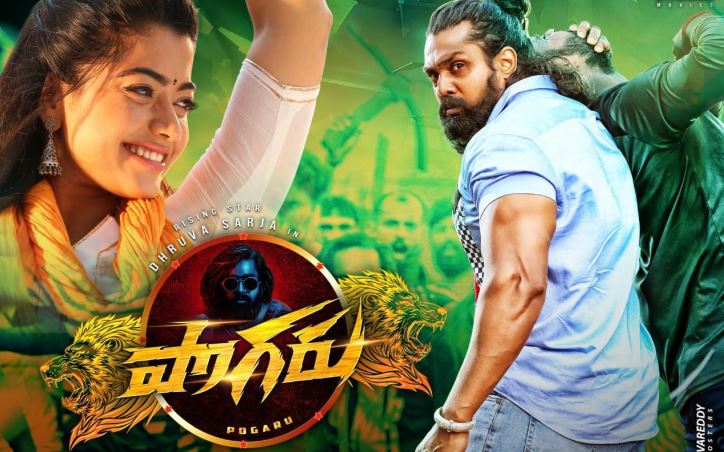 The film stars Dhruva Sarja, Rashmika Mandanna, Dhananjay, Raghavendra Rajkumar, Ravi Shankar and others in lead roles. Under Nanda Kishore direction, the movie is bankrolled by B. K. Gangadhar in Kannada while the Telugu Theatrical rights are bought by D Prathap raju.

the movie has gained a lot of popularity with just Karabuu video song, the Kannada version of the song has got 170 million + views while the Telugu version has got more than 43 millions of views. Sai Surya Entertainments has bought the Telugu dubbing rights of the film for Rs.3.30 crore while the Hindi dubbing rights were already sold for Rs.7.2 Crore. The movie is scheduled for theatrical release on February 19, 2021.

The actor reportedly had to shed 30 kilos for the first schedule, in which his character was that of a school student. After its completion in April 2018, Dhruva had to gain weight again for the following schedule. He recently shared that it was difficult for him to lose and gain weight so quickly.

Directed by Nanda Kishore, the film features Rashmika Mandanna as the female lead with Dhananjay, Raghavendra Rajkumar, P Ravi Shankar, Kai Greene, Sadhu Kokila and others in the star cast. The technical crew of Pogaru comprises Chandan Shetty to score music, with camera work by Vijay Milton and Mahesh S doing the edits. The film is bankrolled by BK Gangadhar under the banner Sri Jagadguru Movies on a budget of Rs 25 crore. It was scheduled OTT Release Date in Telugu on Aha App in July first week.