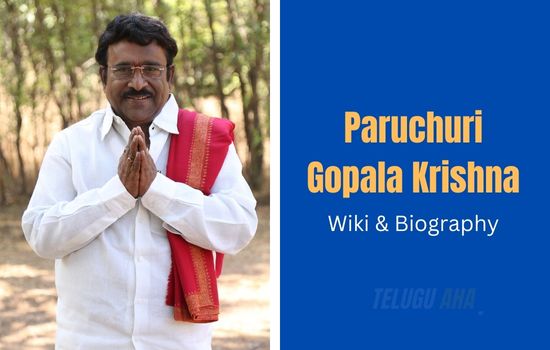 He is Hymavathamma and Paruchuri Raghaviah’s child. He has a sister who is older than him and two brothers who are older than him. Their names are Paruchuri Venkateswara Rao and Paruchuri Kutumba Rao. Gopala Krishna has a Bachelor of Science (B. SC) from Government City Science College and a Master of Arts (M.A.) in Telugu from Arts College.

Gopala Krishna has a Bachelor of Science from the Government City Science College and a Master of Arts in Telugu from the Arts College. In 2003, he got his Ph.D. from Osmania University in Telugu Cinema Sahityam, Katha, Kathanam, and Siplam. Gopala Krishna sent his dissertation to Berhampur University in Orissa so he could get a D.Litt. in literature. He took the viva for his 2015 exam, which was on “Telugu Cinema Story: Social Outlook.” He also wrote the Hindi version of “Rashtra Bhasha.”

After Sri. Nandamuri Taraka Ramao gave the writing team the pen name Paruchuri Brothers in 1982, they became well-known writers. Gopala Krishna’s first role was in the movie Ee Piilaku Peelavuthunda, which came out in 1983 and was written by the Paruchuri Brothers, who also wrote the script. In addition to writing for more than 350 movies, he kept acting in movies like Naa Desam, Eenadu, Mundadugu, Prajaswamyam, Varsham, Samarsimha Reddy, Indra, and many more. The twins decided to become filmmakers in 1984, and Kai Raja Kai was their first project as executives at Srinadh Motion Pictures.

Later, they were able to make a total of 9 movies. Gopala Krishna did a lot of different things on TV, like being a co-host, director, host, and writer. In 1996, he was in charge of the reality show Chilaka Gorinka on Gemini TV. From 2008 to 2013, Gopala Krishna hosted the talk show Praja Vedika on Gemini TV. The show had 200 episodes. In 2015 and 2016, he was also a co-host on Maa TV’s reality shows Samsaram oka Chadarangam and Andhamina Jeevitham. Gopala Krishna made the TV show Mattimanishi for Sri in 2001. In 2013, he directed the ETV telefilm Sati Savitri, which is based on the myth of the same name.

In 2004 and 2013, he was in the Telugu TV movie Thulabharam ZEE, and he played Neelakanta Sastri in the ABN TV show Yogi Vemana chronicled. Gopala Krishna still teaches, even though he is now an honorary professor. He has been taking screenwriting classes at Potti Sreeramulu Telugu University since 2008, and he is a member of both the association for Telugu film directors and the association for Telugu cine writers. In 2017, he started giving advice to people who wanted to be writers by posting his movie scripts on his YouTube channels (#ParuchuriPalukulu and #ParuchurPaataalu).

When he posts these intuitive teachings on his other social media sites, like Facebook and Twitter, students can work together and ask and answer questions. In addition to his work as a composer and actor, he was an Executive Council Member for Potti from 1997 to 2005 at Telugu University. In 2002, he filled in as a member of the Movie Artist Association’s executive council.

Gopala Krishna has held many respectable jobs, such as chairman of the Smt. aruchuri Hymavathy Raghaviah Memorial Trust since 2012 and trustee and convener of the Paruchuri Raghubabu Memorial Trust since 1991. Since 1991, he has been a member of Tyagaraya Ganasabha for life. He has been in charge of the Telugu Cine Writers Association since 2007. Many honours and awards have been given to him for his work as a director, writer, actor, and dialogue writer.