Paper Rocket Web Series Review: Udhayanidhi Stalin’s wife Kiruthiga made her first directorial effort in 2013. “Vanakkam Chennai” was the name of the place. Vijay Antony starred in her second film, “Kaali,” which was released in 2018 after a five-year hiatus. A new web series titled “Paper Rocket,” shot in Tamil and dubbed into Telugu, welcomes her back. On July 29, 2022, Zee5 aired the first episode of the series. Here we go: Let’s see if this show is worth your time. 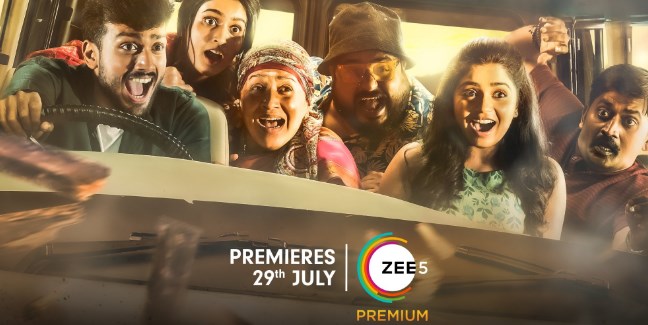 It was a road trip across the state of Tamil Nadu with six strangers who had never met. In spite of the difficulties and disappointments, they are all on a journey to accomplish something on their bucket lists. Do you think Jeeva will be able to satisfy their desires?

Each character and their world are established in great detail by director Kiruthiga Udhayanidhi because the viewer has to travel with them throughout the entire series, and it worked out quite well. This is a funny, happy show with a few philosophical undertones and a dash of whimsy. Even though the show takes a while to get going, the characters do an excellent job of conveying all of these emotions.
This series, despite its well-crafted characters and stories, isn’t able to hold your attention for long. Even though the show has a lovely ending to each episode, as we watched it, we didn’t feel moved by it. There is a possibility that this is because the six strangers’ feelings could have been more clearly conveyed.
Kalidas Jayaram does an excellent job as Jeeva, despite the fact that the character isn’t particularly challenging to play. The rest of the cast was equally impressive.
She had a good idea, but she couldn’t bring it to life on the big screen. Several scenes make it difficult to progress the story and make it appear that the writers are attempting to stretch a short episode.
Technically. I think it’s great. Richard M. Nathan, Paper Rocket, and Gavemic U. The rest of the cast did an excellent job, but Simon K. King’s music is subpar.
Finally, Paper Rocket is a beautiful amalgamation of people’s emotions.