Papam Pasivadu Web Series OTT Release Date: Aha OTT platform has been delivering some best content these days, their recent outing Anya’s Tutorial has received some decent reviews, and recently they have also released youtube star Shanmukh Jaswanth’s Agent Anand Santhosh and now they are back with another interesting series with singer Sreeram Chandra in the main lead called ‘Papam Pasivadu’, Aha officially unveiled the title and the series will be helmed by Lalith Kumar, However, stay tuned for a while to know interesting information about the series. 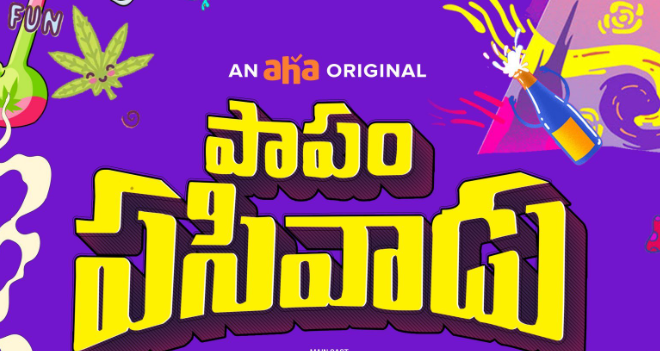 Papam Pasivadu makers haven’t divulged what the story is about as we go by the title poster we can hunch that this will be urbanized rom-com web series as the lead protagonist unaware about this gen Z and how he copes with all these situations is the crux of the story.

Sreeram Chandra and Sri Vidya Maharshi are the main leads and Raasi Singh, and Gayathri Chaganti is in pivotal roles the series is directed by Lalith Kumar, Gokul Bharathi cranks the camera, while Jose Jimmy provides the music, and the series is produced by Akhilesh Vardhan and backed by Aha.

Sreeram Chandra became a pretty known face after winning the Indian Idol and the craze became twofold after he participated in Big Boss Telugu now Aha has been capitalizing on his craze and backing his series called Papam Pasivadu.

After participating in Bigg Boss Telugu, Sreeram Chandra got a chance to host Telugu Indian Idol produced by Aha, now he is again working with aha but this time not as a host, despite the fact this series marks his digital debut as the main lead, However, the series currently under production and as of now makers or Aha team haven’t announced when it’s going to be released and stay tuned with us we will update once we get the official confirmation.

Sreeram Chandra had tried before as a main and he made a movie also, unfortunately, due to some unknown reasons the movie got canceled and now he seems quite happy with the opportunity as he expressed his excitement through his social media handle, Despite the fact makers haven’t announced the release date of Papam Pasivadu as we can expect the release date very soon, stay tuned with us we will update once we get the official confirmation.

When is Papam Pasivadu OTT Release Date and Time?

Not Declared, Papam Pasivadu will be premiered very soon on Aha.

OTT, Papam Pasivadu will hit the OTT space on Aha.

Is Papam Pasivadu hit or flop?

Not Declared, Papam Pasivadu series has not been released so we can not say Hit or Flop

Yes, Papam Pasivadu will be Available on Aha Video

Papam Pasivadu is touted to be a fun series that will be premiered very soon on Aha.