Orey Baammardhi OTT Release Date: Here are the latest updates of Orey Bamardhi Telugu movie OTT Release Date, Digital Rights, Satellite rights & More. Orey Bamardhi is the come back film for actor Siddarth in Telugu. We all know Siddharth is playing one of the lead roles in a Telugu straight film called “Maha Samudram (2021)”. Before this film release Telugu audience are going witness Siddharth in a Traffic police avatar in Orey Bamardhi. 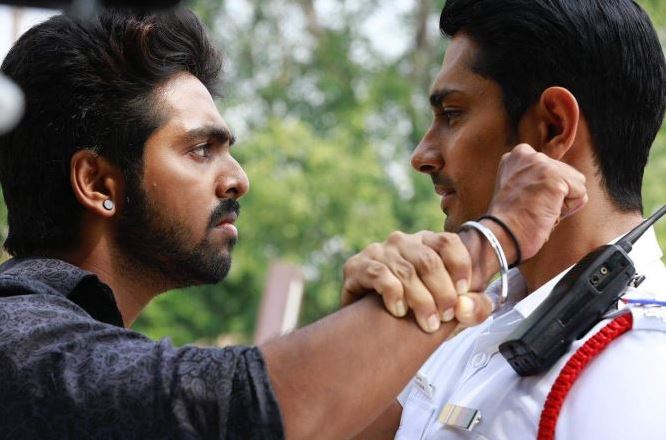 Director Sasi is a South Indian filmmaker known for his movies like Sreenu, Bichagadu and many others. His Tamil film Sivappu Manjal Pachai (2019) was dubbed into Telugu now and scheduled for a gran release in May, 2021. This is a great news for Telugu audience who are missing Siddharth movies from a long time. Besides Siddharth, GV Prakash is playing one more lead role, Lijomol Jose and Kashmira Pardeshi are the two leading ladies of the film.

Telugu dubbing rights of the film were bought by A N Balaji of Sri Lakshmi Jyothi Creations, the film has finished its dubbing works and scheduled for a grand release worldwide. Siddharth who has made a name for himself as a Lover Boy in many films, and GV Prakash Kumar who has earned a good reputation as a music director have played lead roles in a film ‘Orey Bamardhi’ directed by Sasi who delivered a blockbuster like Bichagadu.

Lijomol Jose and Kashmira Pardeshi are the heroines in the action thriller film produced by Ramesh P Pillai under Abhishek Films. AN Balaji will release this movie in Telugu this month on Sri Lakshmi Jyothi Creations. Prasanna Kumar handled the cinematography, while music is by Siddhu Kumar. The action scenes in the combination of Siddharth and GV Prakash Kumar will be the major highlight of the film.

The movie will be available in OTT platform once after its theatrical release. We can expect the Orey Bamardhi movie OTT release date in mid 2021. As always, we will keep you updated on the future of Orey Bamardhi and the official release date for the movie if anything changes.