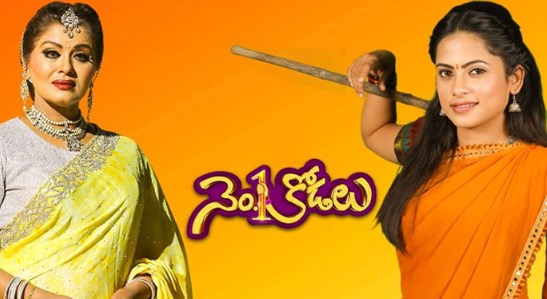 Though No 1 Kodalu Serial story is about relation between Mother-In-Law and Daughter-In-Law, Here in this Serial the Plot is different and Unique. Vagdevi is a well Education Business woman who holds number of Educational Institutions whereas Saraswathi who is her Daughter-in-law is Totally Illetarate.

Things in this Serial becomes interesting when Vagdevi tries to make Saraswathi Understand Importance of Education. Will Saraswathi learns and follows what all Vagdevi says is the interesting part of the Story.

Sudha Chandran Plays the role of Vagdev in this Serial. She is Strong woman and a Person of Never Giveup Attitude. Sudha Chandran lost her leg in accident and is now with prosthetic leg. Along with acting she also runs Natya Mayuri Chandran Dance Academy In Mumbai.

Serial Actress Madhumitha Plays the role of Saraswathi in this serial. She Predominantly worked in Telugu, Kannda and Tamil Serial also. Madhumitha was born on March 29, 1995. She gave her debut with Kannada Serial Putmalli which aired on Star Suvarna.

No 1 Kodalu Serial is now one of the Top 5 Shows on Zee Telugu Channel. This Serial first started on December 9, 2019. It Premiers from Monday to Saturday at 8 Pm. Till now 568 Episodes of this Serial got Completed.