Nikhil Siddharth Wiki and Biography: Indian actor Nikhil Siddharth does most of his work in the Telugu Film industry. On June 1, 1985, he was born in Hyderabad, in the Indian state of Telangana. In 2006, Nikhil’s first job was as an assistant director on the movie “Hyderabad Nawabs.” In 2007, the movie “Happy Days” was his first role in the Telugu Film Industry. Next, he was in a number of hit movies, such as Swamy Ra Ra, Karthikeya, Ekkadiki Pothavu Chinnavada, and Arjun Suravaram. He got married to Doctor Pallavi Varma on May 14, 2020, in Hyderabad. 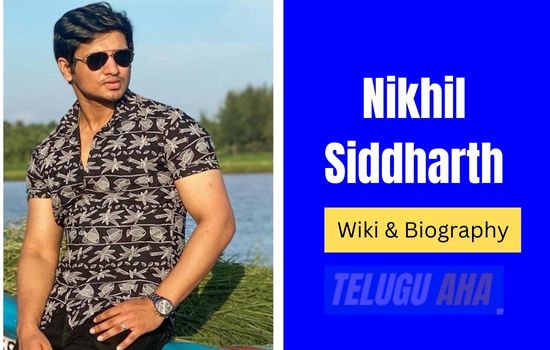 Nikhil Siddhartha is of Begumpet, Hyderabad, India, ancestry. He attended the Hyderabad Public School and St. Patrick’s High School in Secunderabad, India for his education. Throughout high school and college, he was a really gifted student. He graduated from the Muffakham Jah College of Engineering and Technology with a degree in engineering. Nikhil has always desired a career in the entertainment sector. He also appeared briefly in the film Sambaram.

The birth date of Nikhil Siddharth is 1 June 1985. He works in the Telugu film industry as an actor. Nikhil rose to prominence with Sekhar Kammula’s academic drama Happy Days after appearing in a few minor roles (2007).

His first job was as an assistant to the director on the movie Hyderabad Nawaabs. Before he made Happy Days, which was the first Tollywood movie to come out in the West before it did in India, he played supporting roles in a number of movies. Sekhar Kammula, who won an Indian national award, is in charge of making the movie, and Nikhil plays one of the four main roles. Happy Days is one of the few low-budget movies that did well in 2007 at the box office.

His first movie as a director is called “Ankit, Pallavi, and Friends.” He has been in hit movies like Yuvatha and Veedu Theda, which played in Andhra Pradesh for 50 days. His first movie, Swamy Ra Ra, came out in 2013. The press has been raving about his next movie, Karthikeya (coming out in October 2014). Recently, Karthikeya 2 was his biggest career hit.