NeneNaa Movie OTT Release Date: NeneNaa is an Upcoming Thriller Movie Starring Regina Cassandra in the Lead role. Caarthick Raju is himself the writer and Director of this movie. OTT Rights and Release dates of NeneNaa aren’t announced by any of the film makers as of now. 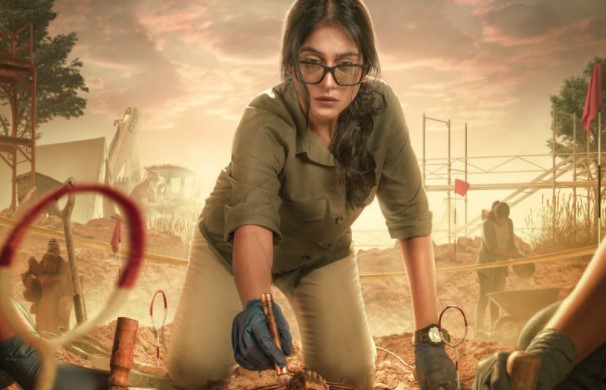 NeneNaa is Completely a Mythological Thriller Drama. Regina Cassandra is playing the role of Archeologist in this movie as revealed by Director Caarthick Raju. its Flashback story seems to be like “Arundhati” and Chandramukhi movie. In the Recent Released Poster Regina appears as an Archelogist taking elements from Skeleton. In ths first Poster Regina’s Portrait as Queen will appear on wall. Much details of the story is still yet to come

Caarthick Raju is the Writer and Director of this movie. Raj Shekar Varma Producing this Movie under banner of Apple Tree Studious Productions. Sam CS Composing the Music while Cinematography is being done by PK Varms. Makers Confirmed that Soon Trailer will be released.

Other Lead Roles in this movie is being played by Akshara Gowda, Michael Pradeep, Ravi Raja, Sathish, Vennela Kishore and others. Shooting Part of Regina Cassandra’s was wrapped up recently. Other details of the movie are given below.

NeneNaa Movie is still in Shooting Shedule. OTT Rights and Release Dates of this Movie aren’t announced by any of the film makers as if now. This film is simultaneous shooting in Tamil also as Soorpanagai.

NeneNaa Movie will release directly in theatres because Corona cases seems to be decreasing and third wave may also not come in nearby days. If every thing goes well then NeneNaa may hit Big Screens by end of this Year 2021. OTT Release date can be expected around 2021 first quarter.