Here are the latest updates of Narappa OTT Release Date, Digital Rights, Satellite rights & more. Narappa (2021) is an upcoming Telugu movie starring Venkatesh and Priyamani in lead roles. The movie is an official remake of Tamil blockbuster Asuran. As we all know Victory Venkatesh previous remakes are big successful movies at Box Office. So, we can expect the same result for Narappa. 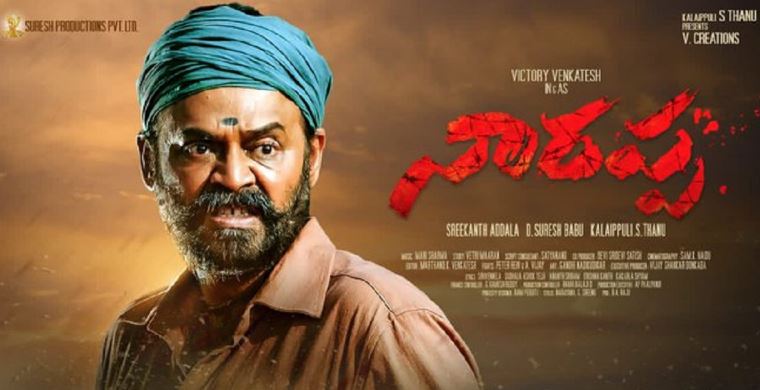 Narappa, the remake of Tamil film Asuran scheduled for a grand release into theaters in early 2021. The makers are planning for theatrical release in the amid lockdown, since the movie is more suitable for theatrical audience. Moreover, Narappa is a movie which revolves around village backdrop and having a lot of scope for actors to showcase their performances. Venkatesh who always tries new characters is now playing a farmer role in village attire for the first time.

Narappa is one among the most awaited Telugu action drama films directed by Srikanth Addala. Since it’s announcement Narappa has been creating quite the stir all thanks to the talented cast in all its lead roles- Venkatesh Daggubati, Priyamani, Prakash Raj, Murali Sharma and Sampath Raj. In its first look poster, teaser and trailers, the movie seems to be quite promising as the viewers can feel the rage in Venkatesh’s expressions.

The film also stars actors Karthik Rathnam, Prakash Raj, Murali Sharma and Sampath Raj in other pivotal roles. Narappa is produced jointly by Kalaipuli S Thanu and Daggubati Suresh Babu under the banners of V Creations and Suresh Productions respectively. Mani Sharma has been roped in as the music composer for the venture.

The Srikanth Addala directorial is the remake of Kollywood director Vetrimaaran’s popular movie Asuran. Actor Dhanush, who played the lead role in the movie, bagged the 2019 National Award under the category of Best Actor for the movie. The plot revolves around a Dalit family which is subjected to caste oppression. Asuran was based on the novel Vekkai by Poomani. Similar to the original, Venkatesh is seen in an angry and rustic avatar in the posters.

Asuran is a movie that revolves around village side faction in 1980’s. The movie highlights some social issues in India like caste clashes, village killings, Untouchability, old village traditions etc. However, the main plot is all about a man Narappa and the incidents happens in his life, the movie story is influenced by the real-life massacre that occurred in 1968 in Kilvenmani, Tamil Nadu.

The theatrical release of Venkatesh Daggubati and Priyamani starrer Narappa has also been postponed in view of the second wave of COVID-19. The movie was slated to hit the OTT platforms, as per the reports. In Tollywood circles, there are many rumors surrounding this film regarding the direct OTT release but the makers have not responded on this matter yet. Also, Narappa censor formalities completed and censored with ‘U/A’. So, we can expect an Official update regarding direct OTT Release coming soon.