Mukhachitram Movie Review: Sandeep Raj was impressed with his debut film ‘Colour Photo’ and recently he got a National Award, well he is now removed the direction cap and wore a writer cap and came up with a film called ‘Mukhachitram’ the film has notable actors that were the first one in creating some buzz and after the trailer release then the expectations got twofold, well, carrying the expectations the film got released today, without any delay let’s delve into the review and find whether the film worth watch your time. 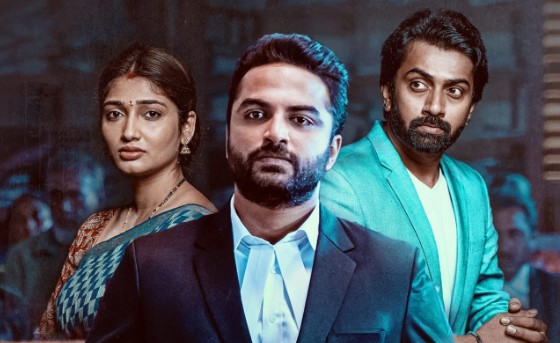 Raj( Vikar Vasista) who is a doctor and decided to marry Maya( Ayesha Khan) but due to some reason he marries Mahathi( Priya Vadlamani), things seem smooth but, Raj’s life completely takes an expected turn when Maya and Mahathi both met with an accident, Maya’s face is getting deformed and Mahathi went coma, Finally, how did Raj faces problems when Maya back with Mahathi’s face with plastic surgery that you need to watch it on screen.

Vikas Vasista, Vishwak Sen, Priya Vadlamani, Chaitanya Rao, and Ayesha khan played the main lead roles, Story, Screenplay, and Dialogue were written by Sandeep Raj, and the film was directed by Gangadhar, Kaala Bhairava composed the music, Sreenivas Bejugam handled Cinematography and Editing by Pavan Kalyan Kodati, and the film was produced by Pradeep Yadav, and Mohan Yella under the banner of Pocket Money Pictures and presented by SKN.

The trailer of Mukhchitram grabbed the attention of where audience thought the film has unique point called plastic surgery of the face, unfortunately, that is limited to the trailer, the movie starts off very routine by establishing the key characters and it then dives to the love story of Maya who loves Raj, which was quite boring track, as there no excitement in the first act and the film gets interesting in the second act where 2 accidents happen of Mahathi who is Raj’s wife and Maya who was once loved Raj, the first half ends with an interesting interval bang.

The second half starts off interestingly by revealing the twist of Maya’s face being replaced with Mahathi’s face and why Maya suing Raj and taking revenge after a point the pace dips with Maya’s flashback but again it rises when the savior Vishwak Sen enters as a lawyer, though the court drama doesn’t make you a thrill in a process of prooving Raj is innocent but Vishwak Sen holds the audience attention with his swag, however, the second half also has no surprising elements and right from the courtroom drama to till the climax tests your patience, except the plastic surgery point, there nothing excites you in the film right from the narration.

Talking about the performances Vikas Vasista as Raj is good as he impressed with Cinema Bandi as a rural auto driver and in this film, he did an urban guy role but in many scenes, his dialogue delivery reminds Cinema Bandi, However, he needs to improve a lot, Priya Vadlamani as Mahathi did a fine job by portraying two shades she performed well, Ayesha Khan as Maya is just okay and Chaitanya Rao who is known for 31 weds 21 series but his performance and his dialogue delivery was not impressive, though he got the good role although he failed in portraying it and rest of the cast did well.

Debut director Gangadhar failed in narrating the story as the linear screenplay is one of the drawbacks of the film, however, the story could have written much better by Sandeep raj, However, Sandeep Raj as writer and Gangadhar as a director both are failed in delivering a good product and engaging the audience.

Technically, Mukhachitram is partially good, Sreenivas Bejugam’s cinematography is okay, and Kaala Bhairava’s songs are not up to the mart but he impressed with his background score, and the rest of the team did well as per the film requirements.

Overall, Mukhachitram is good as bits and pieces and if you don’t have any option for this weekend then you can try, otherwise, you can skip it.