100M+ Most Viewed Telugu Songs on YouTube: Musical tracks plays an important role in the success of a movie. It is rare for a movie to have 100% chartbusters but it is possible for big budget Telugu movies. In the 1990’s and 2000’s we can see many chartbuster movies irrespective of the movie success at Box Office. Musical composers like Manisharma, Keeravani, RP Patnaik, Chakri, DSP, Thaman and others made this possible. Now its rare to witness all songs of a movie to become popular. However, out Telugu musicians delivering their best. 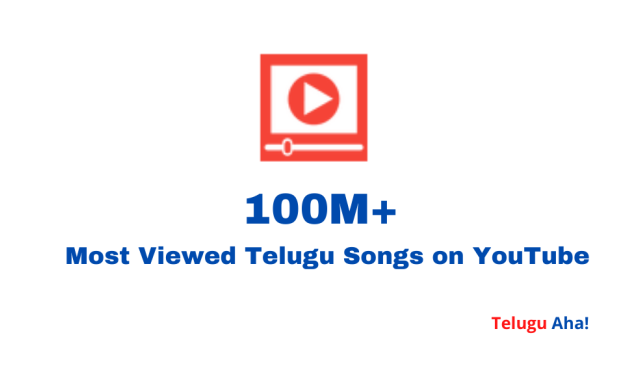 Gone are the days of having a beautiful experience listening to songs on tape recorders and the Walkman. Now everything has got digitized and we are now listening and viewing songs in YouTube. With the monetization opportunities in YouTube and other Online music platforms, many musical companies also coming forward to make independent songs. Moreover, the no.of views for a song on YouTube is considered a record for the music director and the filmmakers. Let us see the 100M+ crossed Most Viewed Telugu Songs on YouTube now.

YouTube is the second biggest search engine on the Internet world after Google. Considering 100M+ Indian songs on YouTube, Hindi, Tamil and Telugu musical composers are a bit ahead than the rest of the languages because of the more no.of listeners to that language. But more or less, songs from other languages like Kannada and Malayalam also giving their best to engage the audience. Here is the list of 100M+ crossed Most Viewed Telugu Songs on YouTube.

“Butta Bomma” song from the film “Ala Vaikunthapurramuloo” starring “Allu Arjun, Pooja Hegde” was one of the prominent songs that crossed 100M+views on YouTube within a month of its release. The musical track has gone viral on PAN India level. This lovable track was composed by “SS Thaman” while singer Armaan Malik did playback singing.

The melody track “Samajavaragamana” from the film “Ala Vaikunthapurramuloo” crossed 400M + views on YouTube including video song version and the song that released as a cover song by Sid Sreeram.

The dancy track “Vachinde” from the film “Fidaa” is the first female song in Tollywood that crossed 350M+ views on YouTube. It is the biggest musical hit in the year 2017 because of the singer “Madhu Priya” and the graceful dance performance of the heroine “Sai Pallavi”.

The romantic track “Pillaa Raa” from the film “RX100” starring “Karthikeya, Payal Rajput” is one of the best love tracks that crossed 250M+ views on YouTube in a very short time. Anurag Kulkarni did playback under the music composition of “Chaithan Bharadwaj”.

The peppy track “Seeti Maar” from the Telugu film “Duvvada Jagannadham” raised by millions of views after its Hindi version starring Salman Khan.

The melody track from Manisharma son, Mahati Swara Sagar​ who is also a musical composer in Tollywood, “Choosi Chudangane” from the film “Chalo” crossed 100M+ views in YouTube.

The Item song “Dhimak Kharab” from the film “Ismart Shankar” is the popular mass song that crossed 100M+views on YouTube. Notable music director “Mani Sharma” and dance choreographers of the song made it possible.

The opening track “Saahore Baahubali” from India’s magnum opus “Baahubali 2” starring “Prabhas, Ramakrishna” is the first song from the Bahubali series that crossed 160M+ views only in Telugu version on YouTube.

The song was composed by rock star “Devi Sri Prasad” and the singers “Shravana Bhargavi and Divya Kumar” did playback for this joyful track.

The folk song “Jigelu Rani” from the film ‘Rangasthalam’ starring “Ramcharan, Pooja Hegde” crossed 150M+ views on YouTube. It is under the composition of a musical rockstar in south Indian “Devi Sri Prasad ”.

The Telugu song “Crazy Crazy Feeling” is from the film “Nenu Sailaja” starring “Ram Pothineni, Keerthy Suresh” is the most favorite song for many youngsters in love. The song was composed by rock star “DSP”. singer “Prudhvi Chandra” did playback for this crazy crazy track.

“He’s so cute”, a joyful track from the film “Sarileru Neekevvaru” starring ‘Mahesh Babu, Rashmika’ is one of the cutest songs that has reached almost 100M within a month. Music of this track iscomposed by Devi Sri Prasad.

Sharwanand’s Jaanu might have failed to impress the audience and get the cash registers ringing, but its music certainly has moved one and all. The song ‘Life of Ram’ which is an introduction song of Sharwanand has just recorded 100 million views.