MLA ROJA Biodata: RK Roja is an Indian politician from YSRCP congress party, Andhra Pradesh. She won as an MLA for second term from Nagari constituency which is located in Chittoor district. Also, She is a popular film personality and well known face throughout South India with her movies and TV shows. She is often called as a fire brand MLA in AP for her aggressive behavior in politics. On this page we are going to see the MLA ROJA Biodata and other details. 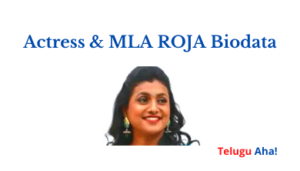 After saying goodbye to Heroine roles, shes started appearing as a TV host in popular Telugu and Tamil entertainment programs in Zee Tamil and ETV. She is a judge for famous Telugu comedy show “Jabardasth”. She is continuing her profession in Film and Television industry along with politics.

Roja started her political career from Telugu Desam party in 1999 and she was elected as a president of Telugu Mahila wing. Due to the change of political scenarios in AP, she joined YSRCP in 2009 and won as an MLA in 2014 with a small margin of vote difference on her opponent. She again won as an MLA in 2019 from YSR congress party.

Actress, APIIC Chairperson and YSRCP MLA RK Roja underwent two major surgeries at a private hospital in Chennai and she was currently resting at home in Nagari.