Mishan Impossible Telugu Movie Review: RRR roar has not stopped yet at the theaters, however a lot of films have been postponed because of RRR, and now its time for medium budget films, with that much-anticipated movie Mishan Impossible starring Tapsee Pannu as a key role has released today April 1, 2022, in the theaters and getting a lot of positive response. After the massive success of Agent Sai Srinivas Athreya, a lot of people have been waiting for another film from RSJ Swaroop the director of the film, however, he came up with another interesting flick. 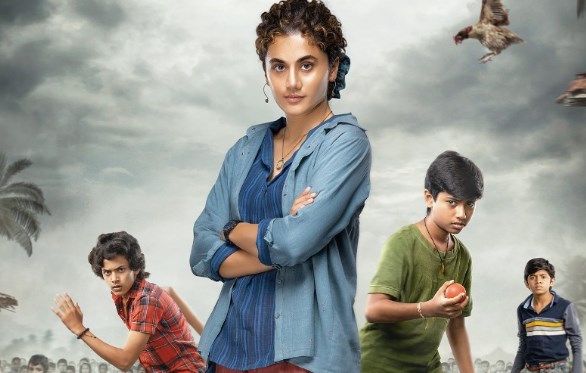 Generally, we often see hero-driven films in Telugu because in Telugu fans worship them, so plot-driven stories are very rare and now it’s slowly coming out some unique content-oriented films. RSJ Swarop mas Mishan Impossible film with 3 young teenagers though they are not well known, and he believed in the content so as he thought people are loving the film, so let’s see in the in-depth review whether this movie is worth watching a movie or not.

The story is based on true incidents, where Taapsee who is a reporter by profession, she is on a mission to catch India’s most wanted criminal for that she needs the help of some talented guys, where she finds 3 young teenagers who madly have a fascination with films and worship all the Telugu director, the 3 guys also on a mission to catch Dawood Ibrahim. finally why does Tapsee need their help? will she succeed in her mission? why 3 teenagers want to catch Dawood Ibrahim is the rest of the story.

Director Swaroop RSJ has proved with is debut film Agent Sai Sai Srinivas Athreya that he has a brilliant sense of humor, he dealt a thriller movie with brilliant comic timing which is not an easy thing when it comes to making thriller movies and made it effortlessly.

Talk about Mishaan Impossible I would say just brilliant. a perfect plot-driven film and well-executed film. movie start with introducing all the important characters which became a plus point for the film as he did not take much time to introduce characters, within in 10 mins will jump into the story.

The movie has serious points yet the director dealt with comedy, it seems Swaroop has not come out of Agent Sai Srinivas Athreya’s hangover. however, we never feel bored throughout the movie. the three teenagers’ comedy chuckles you in a lot of scenes.

Taapsee has in a series mission, once this trio meets Taapsee the movie gets even more interesting.

Director Swaroop RSJ has done a brilliant job as it’s not easy to make a film with kids, it needs lots of patients and preparations to make them understand the importance of the scenes and he handles them effortlessly, we could see on the screen. hope he will make such unique films in the future.

I think after a long gap in Taapsee Pannu’s perfect comeback with this film, she always chooses her roles wisely and this would be the best characters so far in Telugu. a major highlight of the film is the trio Harsh Roshan, Bhanu Prakashan, Jayateertha Molugu, three of them nailed their characters, in a lot of scenes they mesmerize with their comic timing and performances, and rest of the cast did their best.

Another major highlight of the film is the music Mark K Robin is one of the underrated music directors in Telugu. his use of sounds is quite unique which we never listen before in Telugu and that’s what made this film so special, he gave a brilliant background score and cinematographer Deepak Yeragara has done a decent job, and the rest technical departments did their job well.

Finally Mishan Impossible is worth watching movie, it’s a perfect adventure comedy thriller that makes you laugh, thrill, and surprise. go watch it in the nearest theaters.