Masooda Movie Review: Very few producers have good taste in judging films and Rahul Yadav Nakka is one among them who produced films like Malli Rava and Agent Sai Srinivas Athreya and he is come up with another unique film called ‘Masooda’ horror genre has vanished in these days and in that situation to come up with Horror film need lot of guts and the teaser and trailer looks unique and grabbed the attention and also seems Masooda is not a regular horror flick, well the film has finally released and lets find out whether the film is worth watching. 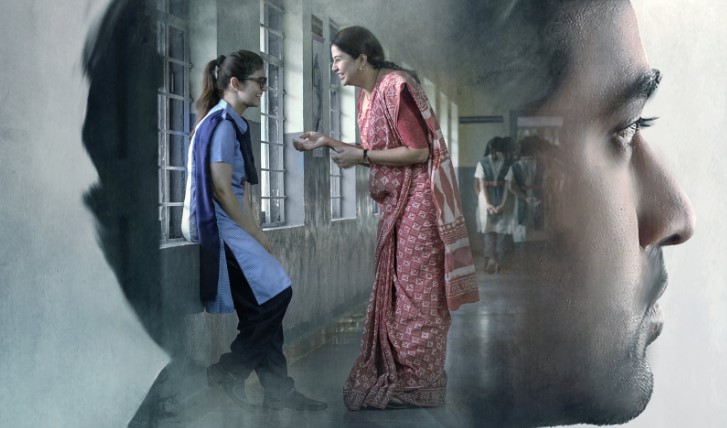 Masooda is touted to be a horror drama where the story 17-year girl called Nazia who behaves mysteriously as her mother Sangitha seeks the help of her neighbor Gopi(Thiruveer) who is having a  fear phobia and decided to help her the duo takes her to ‘Peer Baba’ eventually her behavior gets twofold and Gopi and her mother start facing problems with her, However, lot of questions were un answered with her strange behavior and in the proceedings, they come to know about a girl called Masooda, Finally, who is Masooda? what was her back story is the crux of the film.

The horror genre was one of the most interesting and exciting genres but it has vanished now, amidst audience loves for new stories, it’s not easy to come up with this horror genre again if makers don’t offer an engaging story then the audience ruthlessly make the movie flop, but Masooda is definitely not a regular horror tale, the movie looks regular at the beginning of the film but slowly the premise and mood pulls you into the world of Masooda and makes you travel with the story, though the story takes time to take off although, the technical brilliance gives you unique experience.

The first half went with an interesting drama when Gopi and Sangeetha try to cure Nazia’s condition with both the process of Medication and Peer Baba, those scenes were quite interesting and the suspense hold the audience’s attention throughout the firsthalf and created curiosity to watch the later half, the latter half starts off interestingly by revealing all the layers and while revealing the twists one by one gets the film interesting and makes you glued to the seat, the second half’s racy screenplay holds the audience attention and the climax also convincingly executed.

Sangitha as the science teacher and innocent mother just killed it, and after a long gap she got a good role to perform, Tiruveer as Gopi is cool as usual his subtle performance makes the character believable, Kavya Kalyan Ram is just okay as she doesn’t have much scope to perform and rest of the cast did well.
Sai Kiran tried to deliver a unique horror film and he succeeded in delivering the finest horror thriller, his treatment of the film makes the audience involved in the story and he the emotion he manages to pull it off with his narration.
Technically, Masooda is brilliant, though the film was made with a minimal budget, although Nagesh Banell’s cinematography makes the film look rich in every frame and Prashanth R Vihari has done a brilliant job in providing eery music with different instruments, and the rest of the team did well.
Overall, Masooda is one of the finest horror films in recent times.