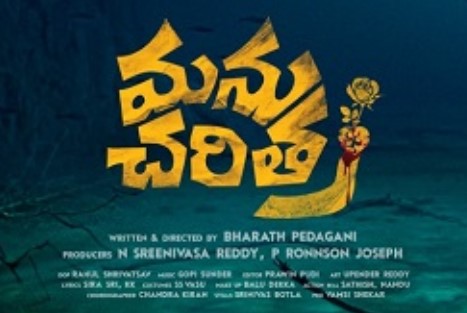 Manu Charitra is an Intense love story film. Recently Motion poster of this movie was released on Occasion of Shiva Kandukuri’s Birthday. The poster captioned with “ Falling in Love is a Painful Joy”.

Actress Kajal Agarwal presenting this movie under banner Apple Tree Entertainments. Bharat Pedagani is the Director and it is his first Debut film. Female lead roles are played by Megha Akash and Priya Vadlamani.

Kajal Agarwal has launched this movie on May 2019. Shooting started began from then but couldn’t complete because of many reasons like pandemic restrictions. Below are the Details of other Crew members of this Film.

OTT Release dates of Manu Charitra is yet to come. Buzz is that Manu charitra makers are Planning to release this movie directly on OTT. Manu Charitra also one of the awaited one in tollywood.

Watch Movies in Theatres or on OTT’s Only. Downloading Movies from Piracy sites is Illegal and may face Serious Legal Consequences.