LKG and Jiivi Tamil Dubbed Movie Premieres on Aha (Double Premiere): One is a comedy entertainer and the other is a Thriller based on parallel lives. Aha is coming up with 2 Tamil dubbed Telugu movies on June 25, 2021, they are none other than LKG and Jiivi. Both these films have gained a good response from audience in its original language. Now Aha is planning to release these two films on their OTT platform. 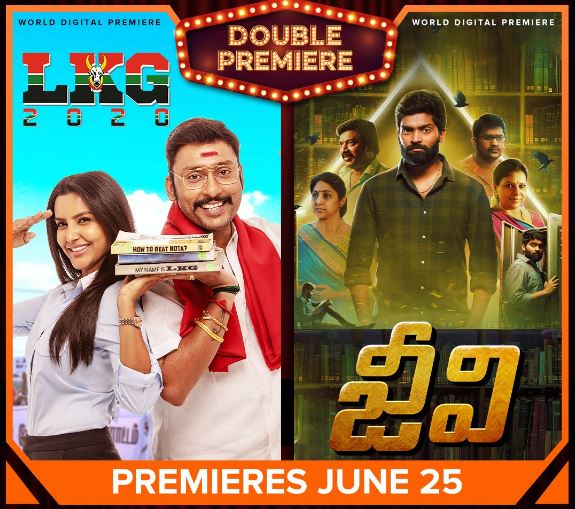 There are no big films to surprise audience in the month of June on OTT platforms. In order to cash on this opportunity Aha has coming up with big excruciating than its previous months. If we checkout the catalog of Aha in June, we can find very fresh content like Kala, Ardha Shatabdham and In The Name of GOD (ING). In addition to the three films, now aha is adding LKG and Jiivi on 25th of June 2021.

The 2019 Tamil political satire, LKG is directed by Prabu. The Telugu dub for the comedy-drama will soon be releasing on the OTT platform this week. The story revolves around LKG, a small-town dweller with the dreams of becoming the state Chief Minister. The movie stars J. K. Ritesh, Priya Anand in the lead roles.

Where To Watch- Aha

The 2019 V J Gopinath directorial, Jiivi, is a Tamil thriller drama ends as a parallel lives mystery. An underprivileged man, living his life in terms with the meager means of his life, plans for a heist and gets away with the crime. The intelligent script and an engaging screenplay make this thriller a not-to-be-missed movie. The Telugu dub of the movie will soon mark its streaming release on the OTT platform this week.

Where To Watch- Aha