Like Share and Subscribe Movie Review: Santhosh Shoban has been doing quite well with his films, though his film called Ek Mini Katha was released directly on OTT, However, he basked a solid hit in his career, with that confidence he come with an interesting flick called Like Share and Subscribe with Venkatadri Express fame Merlapaka Gandi who is an expert in dealing with comedy genre. Well, the film’s trailer grabbed the attention and carried the expectations the film got released today November 04, 2022, let’s delve into the in-depth review and find out whether the film is worth your time. 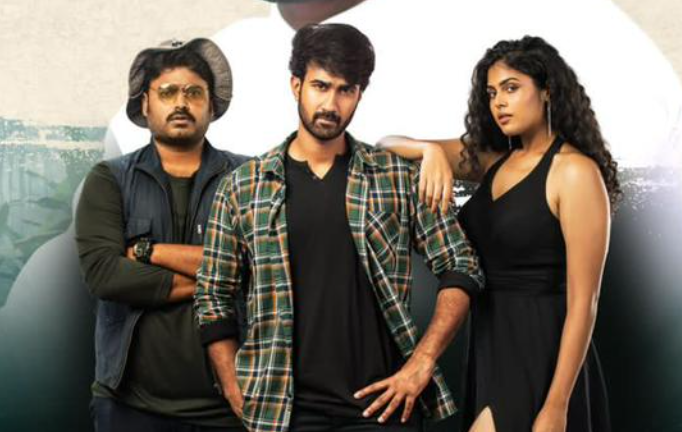 Viplav(Santhosh Shoban) is Travel Vlogger and he runs a channel called ‘Guvva Vihari’ while traveling he met a fellow Youtuber called Vasudha(Farida Abdullah) the duo and Viplav’s friend struck in the village, where the story takes a different turn when this trio accidentally involves the local war with Naxals and finally how they get out of that maze is rest of the story.

Santhosh Shoban and Farida Abdullah are the main leads and Sudharshan is playing an important role, Brahmaji, Naren, Mime Gopi, Govind Padmasurya, Sapthagiri, Babloo, Mirchi Kiran, and Phani the film is helmed by Merlapaka Gandhi, Music Composed by Praveen Lakkaraju, Ram Miriyala, Cinematography has done by A Vasanth and Produced by Venkat Boyanapalli under the banner of Aamuktha Creations in association with Niharika Entertainments.

The movie starts off well by introducing all the key characters in the beginning and pulls you into the film and makes you part of it, though the story is not new, the character’s design make you a fresh experience, However, the first half went with engaging comedy scenes, though the fun generated in the second half for a while but deeply delve into serious mode and the serious narrative make you lost the smile on your face, again the climax makes you laugh.

Santhosh Shoban as Viplav killed it though in a few scenes his performance looks regular, However, he impressed with his brilliant comedy timing, Farida as Vasuda has got a great chance to prove herself and she effortlessly pulled the Vasuda role, she has good comic timing as well, Sudharshan, Bramhaji, Sapthagiri are generated fun as per the story requires and the rest of the cast did well.

Merlapaka Gandhi who was impressed with his debut film called Venkatadri Express his way of dealing with comedy impressed many audiences, later he made a few films but did,nt get success but now it seems he will get hit with Like Share and Subscribe, though there are flaws in the second half but succeeded in making an engaging comedy.

Technically, the Like Share, and Subscribe movie is good but could have been better and A Vasanth’s cinematography is partly good, Praveen Lakkaraju is one of the most underrated composers, as he has given the best music for Merlapaka Gandhi’s films like Express Raja, was one of the successful albums but Like Share and Subscribe songs didn’t register at all and BGM also not up to the mark.