Laatti Movie Review: Vishal started his career as an actor in Tamil, though his family roots are from Telugu states. However, he got some craze with his movies dubbed into Telugu and after the blockbuster hit of ‘Pandem Kodi’ in Telugu, Vishal’s movies were almost all dubbed into Telugu. Though his movies succeeded in entertaining the audience earlier, now failing to fare minimum amounts in theatres turned into a disaster for the last few movies. His latest movie ‘Laatti’ was released in theatres today, let us get into a detailed review of this movie to know if this movie able to break this jinx of failures in his career. 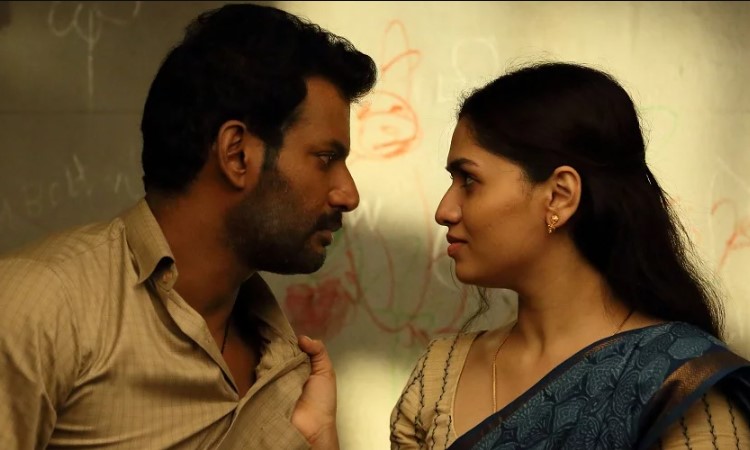 Muruganantham is a very dedicated constable who is known for his loyalty toward his job and his straightforwardness against any situation. He is happily married to Kavitha and has a school-going kid. When Murugunatham and his son, who is 10 years old, find themselves cornered within a building, they must figure out how to break out while being pursued by a group of hostiles.

Laatti movie stars Vishal in the leading role, while Sunaina, Prabhu, Munishkanth, Thalaivasal Vijay, Misha Goshal are playing other prominent roles in the movie. This movie is directed by A Vinoth Kumar and produced by Ramana & Nandaa on Rana Productions banner. Music of this movie is composed by Yuvan Shankar Raja. Cinematography is handled by Balasubramanian & Balakrishna Thota.

Vishal movies are loved by the Telugu audiences because of the mass appeal, as his movies have the content that attracts mass audience in Telugu states. This worked for last few years, but situations completely changed now, as audience are able to watch movies from different languages with different content on OTT platforms and expecting new story points are something that could excite them right through the trailer of the movie.

Laatti is completely a commercial movie that follows a certain format aiming mass audience but fails to make connect with the audience till the later half. First half of the movie has nothing new to offer and most of the scenes look very routine. It is only in the second half, where a conflict point excites us and makes us stick to the screen with some brilliantly choreographed action sequences. Apart from this lengthy action sequence, most of the movie looks very regular right from the beginning.

While it comes to the acting performances, Vishal is a one of the finest actors and that has been proven in many movies, but directors are seeing him more as an action hero, who can perform brilliant stunts on screen than an intense actor who performs as well. His character in this movie is like a cakewalk for him and has nothing new for him to showcase his acting skills. Sunaina has very less screen presence but did her part well in the limited time. The kid who played the role of Vishal’s son was entertaining. Prabhu and all the other actors did their part as required for the story.

Technically Laatti movie looks okay. The music and background score composed by Yuvan Shankar Raja is just okay. He elevated a few intense scenes with his background music in the movie. The cinematography by Balasubramanian & Balakrishna Thota is not up to the mark as most of the scenes look with over-saturated colors, but their efforts should be appreciated in picturizing the lengthy fight sequence in a single under-construction building. Fight sequences composed by Peter Hein are the major highlight in the movie. Production values are okay.

Director A Vinoth Kumar is a debutant. His inexperience can be clearly observed in handling few scenes in the movie. Though he failed to entertain the audience with his content, he succeeded in presenting some impactful action scenes filled with drama that makes audience to stick till the end of the movie.

Overall, Laatti movie is an action-packed drama that has some brilliantly choreographed fight sequences. If you love to watch actor Vishal in action, then you can comfortably watch this movie in theatres.