L B Sriram wiki and biography: L. B. Sriram is best known for his work in Telugu drama and film, but he is also a comedian, screenwriter, playwright, producer, and character actor. Sriram Lanka Bhadradri was his birth name. As a dialogue writer, he first showed up on the big screen in Kokila. 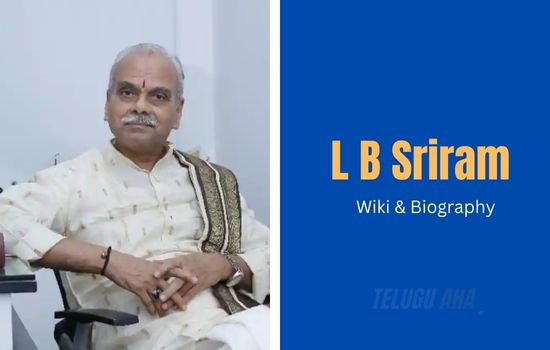 Because LB Sriram is working on so many different projects, no one knows where he went to school. But he has made a few short movies that have been well received. Most recently, he made an over-the-top movie called Kavisamrat Viswanadha Satyanarayana, which also got good reviews.

Before he started writing for Telugu movies in 1988, he spent 20 years acting and putting on plays with the Mahati Theatre Society, which was started by his siblings and a few other people. Sriram wrote the dialogue for more than 40 movies, including “April 1st Vidudhala,” “Appula Appa Rao,” “Vaarasudu,” “Hello Brother,” “Hitler,” “Arundhati,” “Bhagyalakshmi Bumper Draw,” and many more.

After playing small parts in a few movies, he decided to become an actor. “Chala Bagundi,” by E. V. V. Satyanarayana, was his big break. It came out in 1999. In 2000, he won his second Nandi Award for Best Male Comedian for his funny role in the movie. He also got to play the main character in the touching movie “Ammo Okato Tareekhu,” which was based on Sriram’s own play “Onteddubandi.”

Since then, he has been in a number of movies, such as Itlu Sravani Subramanyam, Chinna, Hanuman Junction, Avunu Valliddaru Ista Paddaru, Thotti Gang, Dil, Missamma, Mr. & Mrs. Sailajakrishnamurthy, Radha Gopalam, Subhas Chandra Bose, Chatrapathi, Lakshmi, Happy, Baladur, The last movie he was in was “A Shyam Gopal Varma Film,” a satirical comedy by Rakesh Srinivas.