KRK Telugu Movie Review: KRK, Kanmani, Rambo, Katija the Telugu dubbed movie starring the biggest actors in Indian cinema Vijaysethupathi, Nayanthara, and Samantha, directed by Vignesh Shivan. one of the most much-awaited films in recent times as great actors sharing screen space together so a lot of fans have been waiting for its release and finally the film released in Telugu with the title called KRK(Kanmani, Rambo, Katija). So without any delay let’s get jump into the in-depth review of KRK and let’s see whether this film is worth watching or not 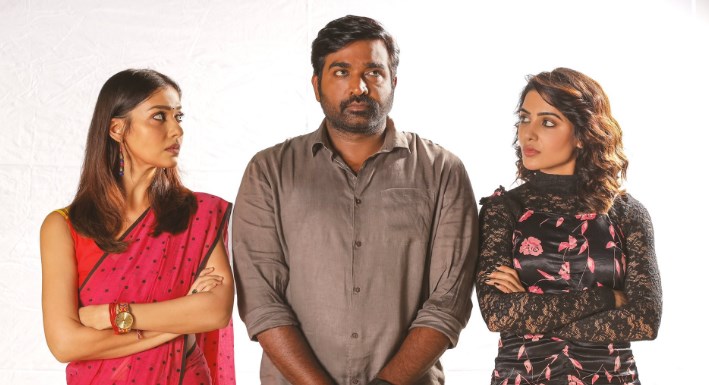 KRK’s story follows, Rambo(Vijay Sethupathi) who works in an ad agency, he fell in love with Kanmani(Nayanthara) and get married, everything is going until Katija enters into Rambo’s life. However, Rambo fell in love with Katija. in the process Kanmani gets to know about Katija and Katija gets to know about Kanmani. after knowing the truth Rambo wants to marry Katija also. Finally, Will Kanmani accepts him for a second marriage? How Rambo gets out with this situation is the rest of the tale.

KRK stars Vijay Sethupathi, Nayanthara, Samantha, Prabhu, Parthiban, RJ Balaji, and others, and the film was directed by Vignesh Shivan, Cinematography has done by SR Kathir & Vijay Karthik Kannan, Music has composed by Anirudh Ravichander and the film produced by 7 Screen Studio.

There is nothing to talk about Vijay Sethupathi’s performance, and it always feels great to watch him in comedy roles because he has a unique style in comedy. and as Rambo he effortlessly nailed it, and Nayanthara as Kanmani is just brilliant her performance with eyes is just brilliant, and Samanth as Katija is brilliant as she has done some comedy roles before, and in KRK her looks and comic timing was just simply superb, and rest of the cast did their part well.

Vignesh Shivan deals with comedy in a very unique way as he doesn’t try to tell a new kind of triangle love story, he just tried to tell a regular story with well-written characters and well-written comedy dialogues.

SR Kathir & Vijay Karthik Kanna’ Cinematography is not up to the mark and Anirudh Ravichander’s music didn’t register even one song but he manages to give a nice background score. and the rest of the technical departments did their best.

Finally, KRK is a must-watch movie only for Vijay Sethupathi, Nayanthara, and Samantha’s performances and a few comedy scenes.