Krithi Shetty Upcoming Movies List in Telugu: Krithi Shetty is a model and Indian film Actress who predominantly works in Telugu movies. Krithi made her debut into movies with Telugu film “Uppena (2021)” produced by Mythri Movie Makers starring opposite to Panja Vaishnav Tej. Before coming to movies she did many commercial Ads. Currently, she is working with Actor Nani in “Shyam Singha Roy” which is scheduled for 2021 year end release. 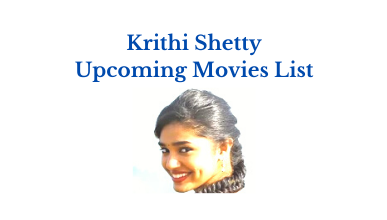 She got her first opportunity as a Heroine in Uppena (2021) movie through Puri Connects, a talent acquisition platform for actors founded by Tollywood filmmaker Puri Jagannadh. The movie released worldwide on 12th February, 2021 with a lot of buzz and declared as the Blockbuster film.

Director Lingusamy’s upcoming film with Ram Pothineni will feature the actor in a cop role. Tentatively referred to as RAPO 19, the film is deemed to be an intense action entertainer. The film is said to have a social message and is inspired by real-life events. It is produced by Srinivasaa Chitturi under the Srinivasa a Silver Screen banner. The latest update is Devi Sri Prasad has been roped in to compose the music for the film. Kriti Shetty, who made an impressive debut with Uppena, has been roped in to play the female lead.

Actor Nani’s 27th film, Shyam Singha Roy, was officially launched, The film is being directed by Rahul Sankrityan, Shyam Singha Roy film also stars Sai Pallavi and Krithi Shetty as the female leads, and Nivetha Pethuraj is reportedly in talks to play another important role. The latest development is that the story is based on the concept of reincarnation.

Sudheer Babu and Krithi Shetty set to collaborate with Mohana Krishna Indraganti for his next. . The film will see actress Krithi Shetty will play the female lead and Vivek Sagar will compose the music. The movie is expected to be a romantic drama with all commercial elements in it.

To put an end to the rumours the actress took to social media and shared an update on her upcoming projects. The actress clarified that her upcoming movies are with Nani (Shyam Singha Roy), Sudheer Babu (Aa Ammayi Gurinchi Meeku Cheppali), and Ram (Ram 19). The Uppena actress’ present focus is only on these projects and has not signed any other movies. She further added that she will update her fans once she signs further movies.

Kriti Shetty is just 17 years old, born in 2003. Many Internet users confused krithi Shetty with Tamil actress Advaitha due to of her same screen name. Also, photos and social media profiles of “Uppena” actress Krithi Shetty clubbed with Advaitha’s Wikipedia profile. This lead to confusion about her filmography while Googling. So, CineList wants to clear your confusion with the list of Krithi Shetty Upcoming Movies in Telugu and Tamil languages.