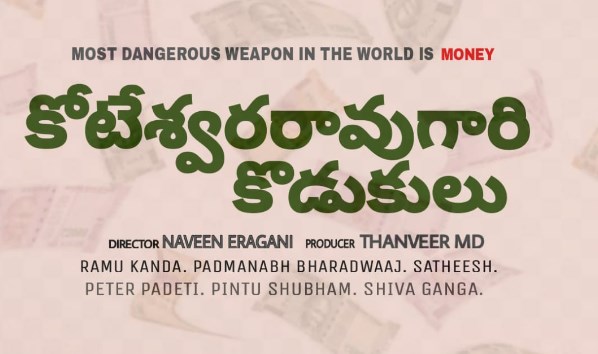 Koteswara rao gari kodukulu is a Thriller family drama. Story revolves around 2 sons and father. Father want’s to make his sons crorepati but fails and later son’s try to make father crorepati but they too fail. The movie’s caption “Most dangerous weapon in the world is money” arises much interest.

Naveen Iragani who earlier worked with RGV has written and directed this movie. Abhinav and Satyamani are playing the main lead roles. Tanveer MD has bankrolled this project.

Senior actor Naresh has given first clap for this movie. Actor Adivi sesh wished good luck for this movies team. Koteswar Rao Gari Kodukulu movie is completely based on the power of money.

Koteswar Rao Gari Kodukulu movie’s shooting began in January 2021. Makers earlier decided to finish the shooting by may but couldn’t because of corona second wave. At present movie is in final stage of production and it may release in 2022.

Koteswar Rao Gari Kodukulu movie is in final stage of making. Movie’s Shooting has almost completed. It may hit big screens in the first quarter of 2022. Ott release date of this movie can expected by mid 2022.

Koteswar Rao gari Kodukulu is a Family suspense thriller drama. This movie’s shooting has begun un January 2021 and its in final schedule of production. Keep visiting our website to get latest updates on upcoming new movie releases.