KondaPolam Movie OTT Release Date: PanjaVishnav Tej has come up with another Movie Kondapolam after his Uppena bagged records in Tollywood. Kondapolam Movie is Being directed by Krish Jagarlamudi. Makers have confirmed that Kondapolam will hit Big Screens on 8th October 2021. 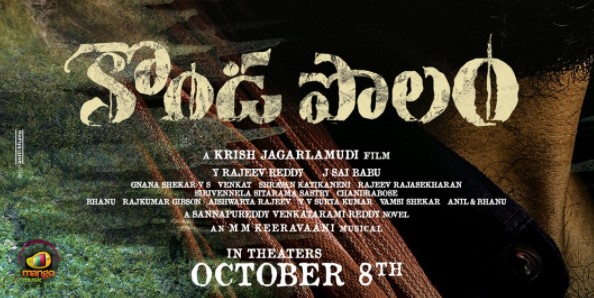 Kondapolam movie is an Adoption of Telugu Novel Kondapolam written by Sannapureddy Venkata Ramireddy. This novel was published in 2019. Kondapolam is the story of How the Sheperds Protect their Sheep in Nallmalla forests from Predators and Red Sander Smugglers.

Keeravani is Composing the Music, while Cinematography is being handled By Gnan Shekar V.S. Major Portions of the Movies was shot in Vikarabad District of Telangana. Rakul is Playing deglamour role of shepherd girl.

Konda polam is Going to Release in theatres on 8th October 2021. OTT Rights Detials of the movie aren’t announced by any of the film makers. At present Post Production Work is going on Full Swing. Kondapolam’s First Look and Glimpse was Released Recently. Vaishnav Tej Played the role of Lowclass guy in Uppena, Here in Kondapolam He again going to play the role of Shepered Man of Village.

If Every thing Goes well in theatrical release of Kondapolam on 8th October 2021, then OTT Release Date can be Expected in November 2021. At present there are no chances of Covid third wave. Corona Cases also seems to be decreasing day by day. Kondapolam will release as Confirmed by Movie Makers.