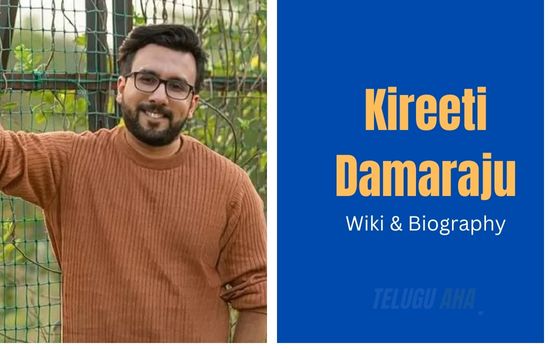 Kireeti started acting in short movies like “Ontiganta” and “Anukokunda” in 2011. “Uyyala Jampala,” which came out in 2013, was his first Telugu movie. After receiving his B.Tech, Kireeti Damaraju started working professionally as a service engineer for Electronic Arts Mobile. Then he went to the Sony India Software Center in Hyderabad.

Since the short film “Ontiganta” came out in 2011, he has been working hard to become an actor. This man made his debut in Tollywood in 2013 with the short film “Anukokunda,” which was shown at the Cannes Film Festival.
In the movie Bham Bolenath, which also starred Naveen Chandra, critics liked how he played a heroin addict.

In the movie “Many Happy Returns” by Gunnam Gangaraju, in which he also acted, people loved how well he knew when to be funny. When he played Murali in Uyyala Jampala for the first time, he quickly became well-known among moviegoers.

People who know him well have called him the “perfect groom.” Chal Mohan Ranga, Mental Madhilo, Vunnadhi Okate Zindagi, and Meeku Meere Maku Meme are some of his movies that are known for how well he acts. When his movie Debbaku Tha Dongala Mutha came out, he became well-known as an actor. In a similar way, his small part in the movie Size Zero helped him become more well-known.

Several of the movies he was in, like Yevade Subramanyam, Vunnadhi Okate Zindagi, Mental Madhilo, Taxiwala, Zombie Reddy, and DJ Tillu, were well received by critics and did well at the box office. He was on Bigg Boss Telugu Season 2, which was 2018’s most popular reality show, but he was kicked off on day 21.