Kiran Abbavaram Rules Ranjan Movie OTT Release Date: Kiran Abbavaram who has decent hits like Rajavaru Ranigaru and SR Kalyanamandapam in his kitty is now coming with a new age love entertainer titled “Rules Ranjan”. The Star whose last film Sammathame fared average in theatres and he is looking for a strong comeback to prove himself as a bankable actor. 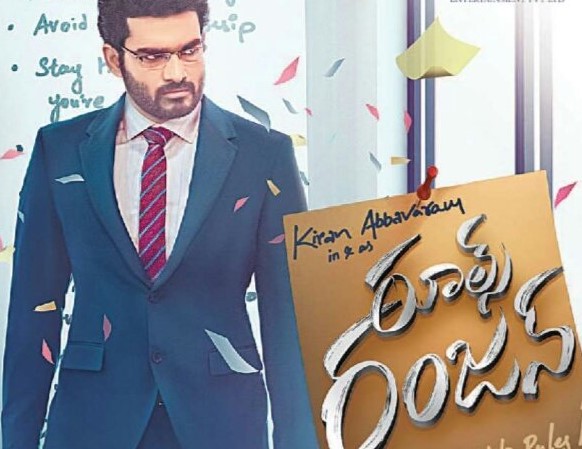 Ranjan, who is very strict in every aspect of his life and follows every rule, falls in love with a girl who has very carefree nature. Ranjan slowly starts breaking his own rules to win the heart of his love interest. How did he finally make her accept his love forms the rest of the story.

Rules Ranjan stars Kiran Abbavaram, Neha Shetty and Vennala Kishore in main roles. Rathinam Krishna is the writer and director of the film. Amresh Ganesh is composing the music and M Sudheer is working as the Art director. Movie is bankrolled by Star Light entertainmets Pvt.Ltd in association with Sri Surya movies.

On the occasion of Kiran Abbavaram’s birthday, Rules Ranjan team has released a first look poster revealing the look of actor from the movie. Looks like the movie is all about a love story with some funny and interesting concept added to it. Movie team is yet to announce the release date information and once the information is provided by the team, the same will be updated on the page, till then stay tuned for more updates.

Kiran Abbavaram has a plenty of movies under his kitty and on the occasion of his birthday a few of the movie glimpse and first looks have been revealed. Rules Ranjan is one among the films and the movie has got enough hype as the movie is backed by one of the top producers in the past Sri A.M. Ratnam. As soon as the movie completed the shoot, the OTT release date of the movie will be announced by the team. We will keep updating the latest information about the movies, as early as we have an update from the team, till then keep in touch with us.

Rules Ranjan movie trailer is yet to release.

When is Rules Ranjan OTT Release Date and Time?

Not Declared, Rules Ranjan movie makers have not yet announced.

Theater, the Rules Ranjan movie will hit the screens in 2022.

Not Declared, Rules Ranjan movie makers have not divulged yet.

Is Rules Ranjan hit or flop?

Not Declared, Rules Ranjan movie has not been released so we can not say Hit or Flop

Rules Ranjan is yet another fun filled love entertainer from Kiran Abbavaram and we can expect a fun ride in the movie and movie is getting ready to hit the screens soon.