KGF 2 Telugu Movie Review: KGF breaks the Kannada industry’s barriers as the kind of reputation Kannada industry had where Kannada industry make only small films and low-quality films, however, KGF has vanished the remarks on Kannada industry had, now a lot of Kannada movies has been making with a large scale. KGF Chapter 2 was made history 2 years back and now after all the post-pones the much-awaited KGF Chapter 2 has finally released in the theaters today April 14, 2022. The audience has been becoming mad in the theaters while they watching the theaters and the film is getting a great response from the audience. with this KGF Chapter 2 Yash and Prashanth Neel become a hot topic in the media and there is no doubt about it. well how this movie turned out to be good, whether this film is worth watching or not will see in this review. 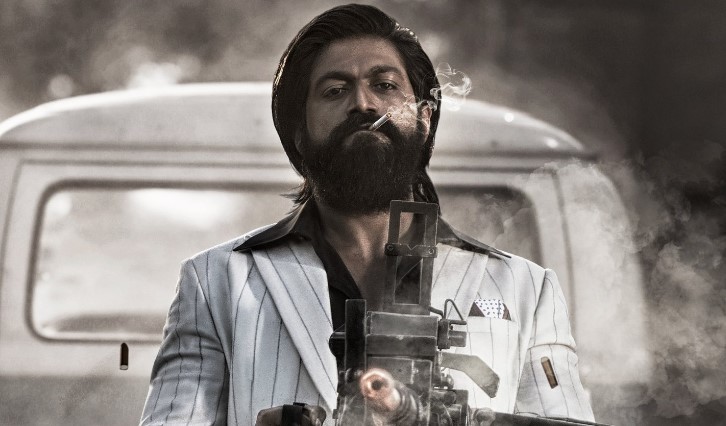 KGF Chapter 2 story follows where the KGF Chapter was ended, after killing Garuda, Rocky Bhai(Yash) became a most wanted criminal and a notorious gangster, meanwhile, and he takes over the KGF and starts ruling with his own roles and the people who were living in KGF, Rocky became a god to them, however, he had face obstacles in a form of the cruelest man called Adheera(Sanjay Dutt), however, Rocky made Adheera steps back but, the prime minister of India Ramika Sen(Raveena Tandon) declares war against Rocky. after knowing the powers of Rocky.  of Adheera. Finally, will Rocky Bhai win over Adheera? How does he face the political powers is the rest of the story?

No matter how the film would be, no matter how the story would be KGF must watch the film in the theaters for a visual experience. though the KGF 1 and KGF 2 have not had a great story like we have seen in many films with that same concept what KGF made the audience go mad is the spectacular visuals and the heroic elevations and the brilliant sound design.

KGF Chapter 2 is way better than KGF Chapter one in terms of narrating a story, Prakash Raj and Rao Ramesh took up the story to the next level.

Yash as Rocky is just brilliant in his body language, his expressions, and his make-over, everything looks brilliant. thankfully Telugu lip sync was great. Sanjay Dutt as Adheera is just scary, as we have never seen such character designs and their looks in Indian cinema, though his looks remind the Vikings characters, still they pulled it off. Raveen Tandon as Ramika Sen is just brilliant her screen presence was quite good and the rest of the cast did their part well.

Prashanth Neel the creator of this evils world, is just phenomenal, his idea to bring on to the screens, to create such a magnum opus world, he has managed well all these things including a stellar star cast.

Cinematography Bhuvan Gowda is the hero of the KGF world, the kind of raw and rustic visuals and the kind of color pallet and color tone we have never seen in Indian cinema. KGF will be the inspiration for Cinematography. and Ravi Basur’s background score was undoubtedly fantastic.

Finally, KGF Chapter 2 is a paisa vasool movie and must-watch movie for theatrical visual and sound experience, go for it you will love it.