Karthi Telugu Dubbed Movies List Till 2021: After the success of his first Telugu dubbed film “Yuganiki Okkadu”, Karthi has become one of the popular actors in Tollywood. Subsequently he released all his Tamil movies into Telugu by dubbing in his own voice. Movies like Yuganiki Okkadu, Aawara, Na Peru Siva, Shakuni, Oopiri, Khakee, Khaidi and recent film “Sulthan” are the biggest hit movies in Telugu. 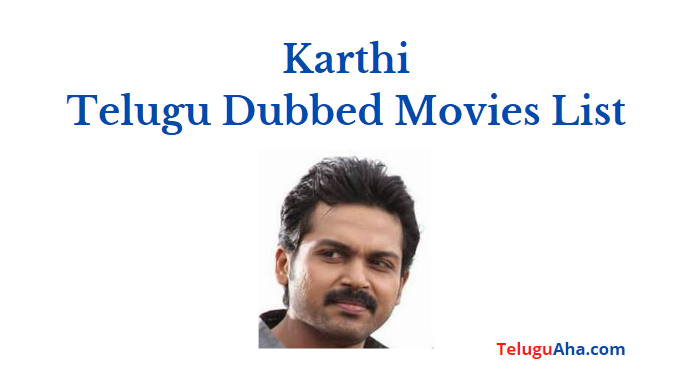 Karthik Father Name Is “Sivakumar(Actor)” And His Mother Name Is “Lakshmi Sivakumar“.His Brother Name Is Suriya (Aka Saravanan Sivakumar).Sister Name Is Brindha Sivakumar.His Highest Education Qualifications Are Bachelor Of Technology(B.Tech) In Mechanical Engineering, Master Of Business Administration(MBA) In Industrial Engineering.

Selva Raghavan’s latest film ‘Yugaaniki Okkadu’ is a rare film which tries to set a new benchmark in South Indian cinema. It’s an epic battle of civilizations which encompasses themes like racism, torture and subjugation among many other things. The film starring Karthi Shivkumar, Reema Sen and Andrea Jeremiah in lead roles was released in Tamil (titled “Aayirathil Oruvan”) earlier this year in January. Produced by R.Ravindran, the film was made with a budget of Rs.32 crores and it was under production for almost two years. ‘Yugaaniki Okkadu’ is a fantasy-adventure which narrates the story of a search party which sets out on an epic journey in search of an archeologist.

Karthi, Tamannaah starrer ‘Aawara’ is a road movie with an ample dose of love, action and masala. The film is the dubbed version of a Tamil film ‘Paiyaa’ which was a big hit in Tamil Nadu. It’s also the first time that Karthi and Tamannaah are acting together. Directed by Linguswamy, the film narrates the story of a jobless, carefree guy who escorts the girl of his dreams from Bangalore to Mumbai.

‘Naa Peru Shiva’ is a dubbed version of the Tamil film “Naan Mahan Alla” and has Kaarthi & Kajal in the lead roles. Kajal is on a roll these days in both the Telugu Film Industry as well as in Bollywood with back to back successes. The film has generated a good pre-release buzz so let us see how director Susindhran’s offering shapes up.

Oopiri is the Karthi’s Telugu debut film. Vikaram Aditya(Nagarjuna) is a paralysed billionaire who needs a care taker to bring spice in his other wise boring life. He interviews a number of candidates before stumbling upon a small time crook Seenu(Karthi) and appoints him as his assistant. Seenu’s careless attitude and liveliness wins Vikaram’s heart big time and changes his life completely. But life can get pretty tough as it induces problems into Seenu’s life through his personal problems. Rest of the story is as to how both these characters fight their problems and stand for each other in life.

The film is set in the early 90’s and Dheeraj(Karthi) is a fierce Tamil Nadu cop who is quite famous for his uncompromising attitude. During this time, the entire state is struck by some brutal robberies all over. People die in these robberies but the cops do not have any clue at all. This is the time Dheeraj takes charge of this case and finds out that a huge dacoit gang from Rajasthan is behind all this. Rest of the story is as to how Dheeraj cracks this case and nabs all those who are behind this.

In order to kill a group of five cops, who seize crores worth of drugs, a drug-dealing gang targets the police intelligence office with the help of an informer. In the process, they supply drugs based liquor to a private police party. To rescue them an officer named Vijay(Narain) takes the help of a just-released prisoner Delhi(Karthi). Will the officer be able to save his mate’s life? Who is Delhi and what is his backstory? How will Delhi go all out to help the police? forms the rest of the story.

Tamil star Karthi teamed up with the producers of his previous hits, Khaakhee and Khaidi, for Sulthan. The film marks Rashmika Mandanna’s Kollywood debut. Sulthan has finally hit theaters in 2021 with Blockbuster talk.